Some days the satire writes itself. 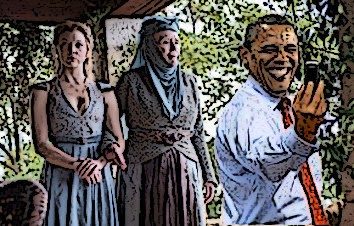 We already knew that Pennsylvania Avenue's most famous resident is a "Homeland" fanatic, but that's not the only small screen favorite that sets his pulse racing.

The president asked HBO Chief Executive Officer Richard Plepler at last week's state dinner for French President Francois Hollande if he could score him advance copies of "True Detective" and "Game of Thrones," according to the New York Times. President Obama reportedly was hoping to catch up on the two shows over the Presidents Day Weekend.

"True Detective" has aired five of its eight episodes, but "Game of Thrones" does not premiere until April 2, so nabbing that screener would be a true feat of executive power. As the Times article goes on to note, President Obama is content agnostic. He is equally enamored of streaming video as he is of premium cable shows.

On Thursday, the president tweeted that "House of Cards" was about to start its second season and beseeched the online community, "no spoilers please."

It would seem that Obama's TV addiction takes precedence over 100 million unemployed Americans, a record 20 percent of all Americans on food stamps, millions losing their health insurance, and a lawless IRS.

Destructive children are frequently given attention absorbing, frivolous electronic pacifiers to pass their time in non-disruptive ways.
As they grow the carve out a self absorbed, prey driven, drug laced existence marked by inappropriate responses to frustration. These are generally perversions and addictions.
When you give such a person unrestricted access to money, power and pleasure the end result is always ruin, for himself, for the people who carried his water, and for the masses he considered to be his subjects.
History is being re-invented, and books about this narcotic will be written with our bones.

That's the nice thing about being president- you can do whatever you want!