WHEN A GOVERNMENT RUNS OUT OF MONEY: Obama Lays Groundwork To Confiscate 401k and IRA Plans

This morning Reuters obtained a leaked proposal disclosing that European Union officials are looking for new and innovative ways to fund their immense debt levels. As noted by Zero Hedge, they’re no longer turning exclusively to central bankers to simply print more money as needed. 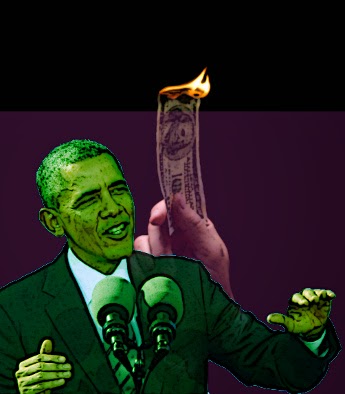 Because last year’s bank bail-in forcing the confiscation of funds from average depositors in Cyprus worked so well, EU regulators and bankers have determined that they’ll use a similar method to fund their future endeavors.

In a nutshell, and in Reuters’ own words, “the savings of the European Union’s 500 million citizens could be used to fund long-term investments to boost the economy and help plug the gap left by banks since the financial crisis, an EU document says.”

… The solution? “The Commission will ask the bloc’s insurance watchdog in the second half of this year for advice on a possible draft law “to mobilize more personal pension savings for long-term financing”, the document said.”

Mobilize, once again, is a more palatable word than, say, confiscate.

This is what happens when governments run out of money.

But if you think this is limited to just Europe, then consider the words of President Barack Obama in his recent State of the Union address.

For all intents and purposes, a similar groundwork is being laid right here in America.

They’ve already taken over the health care industry… why not nationalize our retirement savings while they’re at it?

(Reprinted with permission from Sovereign Man. You can read the full analysis here.)

This is basically the offer that the President of the United States floated last night.

And like an unctuously overgeled used car salesman, he actually pitched Americans on loaning their retirement savings to the US government with a straight face, guaranteeing “a decent return with no risk of losing what you put in. . .”

This is his new “MyRA” program. And the aim is simple– dupe unwitting Americans to plow their retirement savings into the US government’s shrinking coffers.

We’ve been talking about this for years. I have personally written since 2009 that the US government would one day push US citizens into the ‘safety and security’ of US Treasuries.

Back in 2009, almost everyone else thought I was nuts for even suggesting something so sacrilegious about the US government and financial system.

But the day has arrived. And POTUS stated almost VERBATIM what I have been writing for years.

The government is flat broke.Even by their own assessment, the US government’s “net worth” is NEGATIVE 16 trillion. That’s as of the end of 2012 (the 2013 numbers aren’t out yet). But the trend is actually worsening.

Here’s the thing: according to the IRS, there is well over $5 trillion in US individual retirement accounts. For a government as bankrupt as Uncle Sam is, $5 trillion is irresistible.

They need that money. They need YOUR money. And this MyRA program is the critical first step to corralling your hard earned retirement funds.

At our event here in Chile last year, Jim Rogers nailed this right on the head when he and Ron Paul told our audience that the government would try to take your retirement funds:

I don’t know how much more clear I can be: this is happening. This is exactly what bankrupt governments do. And it’s time to give serious, serious consideration to shipping your retirement funds overseas before they take yours.

As former Congressman Ron Paul notes, the government will stop at nothing.

This didn’t just happen over night. The move to make this reality has been going on for quite some time. The first time it was mentioned publicly in any official capacity was at a 2010 Congressional hearing:

Democrats in the Senate on Thursday held a recess hearing covering a taxpayer bailout of union pensions and a plan to seize private 401(k) plans to more “fairly” distribute taxpayer-funded pensions to everyone.

In a nutshell, under the GRA system government would seize private 401(k) accounts, setting up an additional 5% mandatory payroll tax to dole out a “fair” pension to everyone using that confiscated money coupled with the mandated contributions. This would, of course, be a sister government ponzi scheme working in tandem with Social Security, the primary purpose being to give big government politicians additional taxpayer funds to raid to pay for their out-of-control spending.

You’d think that such an idea would be immediately dismissed by the American public, but it has only gained steam since, as evidenced by a 2012 hearing held at the U.S. Labor Department:

The hearing, held in the Labor Department’s main auditorium, was monitored by NSC staff and featured a line up of left-wing activists including one representative of the AFL-CIO who advocated for more government regulation over private retirement accounts and even the establishment of government-sponsored annuities that would take the place of 401k plans.

“This hearing was set up to explore why Americans are not saving as much for their retirement as they could,” explains National Seniors Council National Director Robert Crone, “However, it is clear that this is the first step towards a government takeover. It feels just like the beginning of the debate over health care and we all know how that ended up.”

A few years ago the government of the United States of America nationalized nearly 1/6th of our economy when they took over the health care system with forced mandates. In the process they essentially took control of $1.6 trillion in yearly industry revenues.

But that’s nothing compared to private savings. The total amount of retirement assets in America, including 401k, IRA and savings accounts is around $21 trillion. With our national debt coincidentally approaching the same, the government sees big money and potentially a way out of our country’s fiscal disaster.

This will start voluntarily with the MyRA and other state-sponsored programs. But when not enough Americans are making it their patriotic duty to turn over their funds to their government, they’ll mandate compliance with the stroke of a pen just as they did with the Patient Affordable Care Act.

And just like Obamacare it will be enforced by the barrel of a gun. Failure to comply will mean confiscation without recourse and prison time.

All they need now is a trigger.

And that trigger will likely come in the form of another stock market collapse. Wipe out Americans’ in a stock market crash and scare the heck out of them with more economic bad news, and millions of our countrymen will be all too willing to hand it over to Uncle Sam. Panic is a powerful motivator and what better way to get people on board than by threatening them with squalor and destitution in their old age if they don’t go along with it?

Government officials have been actively working to make this a reality for years. The Europeans are doing the same.

You can put your head in the sand or cover your ears and pretend this is not happening, but that won’t change the outcome.

They will take everything they can get their hands on.

Theft is a declaration of war upon its victim. It puts that person in a position where the lawbreaker can do anything they want to bend them to their will. The Old Testament states that if a thief is killed there is no bloodguilt.

You should post Mark Levin's epic interview with the mind-numbingly clueless Teresa Ghilarducci from a few years ago. He recently replayed it in all its glory. It's astounding that people haven't yet caught on to the depths this evil regime will go to destroy their lives.

The US Government is not "flat broke." In order to make that claim the US Gov. would first have to pay off the $17 trillion it owes. Then, it would just be flat broke.

The single largest untapped pool of money in the United States is private retirement funds.

They will come for it.

Joe Biden floated the GRA notion a couple of years ago, but, as always, no one notice then or has remembered now.

Has anything ever bothered you in life? Do you
have any problem you need to solve? A pending
court case you want to resolve in your favor?
Health, relationship and finance. Welcome to
the world of miracles and wonders, there are
supernatural treasure and power to liberate
mankind from all afflictions. Why cant you live a
life of your dream? Why must you work so hard
and yet earn so little? Why cant you be happy
with the one you love and desire or why cant the
one you love reciprocate and appreciate that
love? Why would the doctor tell you there is no
solution or cure to your problems? Why would
your lawyer say you stand no chance, that your
case is hopeless? Have you been cheated by
anyone or those owing you money refuse to pay
back? Do you need a rapid job promotion in
your place of work? You want to venture into
politics? Now I understand certain things are
hard to believe and comprehend, but all I ask
from you is only 3 days and if you will follow my
instructions and use the items you will receive, I
promise your life will never be the same
again.If you find no relevance in the help I offer
I solemnly appeals do not be vindictive and go
in peace. And if your intentions are to take
advantage of the powerful nature of our items
for the purpose of evil, I will not have any
business with you please be advised. May
angels guide you. All inquiries should be
directed to the Priest Abija email below Email:
spirituallighthealing101@live.com or
you can sent a text message to this number:(518) 303-6207!