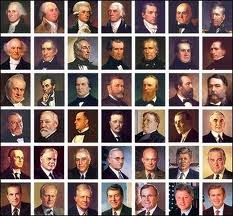 Considering the state of our educational system, that statement would make perfect sense.

Thanks for sharing that, made my day!

Coming from a university, I'm surprised he wasn't number 1.

In fact, coming from a corrupt American university, I'm surprised Hillary Clinton isn't their 1st greatest president in US history.

Personally I thought Doug should've used this montage instead: Our Presidents in Uniform

What Americans like and what is good are usually significantly different things. The television and pop music industry come to mind.

It was named "Pop" for a reason.

This is why a true democracy is bad.

The founders were right, though: this nation's constitution is only suited to a Godly and morally sound people.

Right now it's toilet paper, no fault to the document or its writers. All the fault lies with the people.

Do they mean on earth? In this solar system?

Lincoln was a Tyrant and war criminal and got what he deserved, though too late to save the Southern Civilians that were murdered and forced from their homes.

I agree with Anonymous about Lincoln. Obama is only the second worse president in American history. Lincoln did far more damage.

I love the creative way to declare the worst.president.ever as coming in 5th instead of dead last. Also, sorry Stogie, but Obummer still has 3 more years to outdo Lincoln which I think he may well do but then again he is still in last place no matter what.

lying obama showered with lying stats.. what else will liberal crap come up with.. more lying rinos ??

Obama is now hated more than any president in history.His poll numbers are diving each day . Daily Caller took down a post about lying obama after 1700 comment posts... mostly all very negative
Obama is now a lame duck president as focus on 2016 crowds out obama

this says a lot about the state of education today.

Ummm, by my calculations, Obama came in dead last (44th out of 44). All those presidents who were tied for 2nd or 3rd place don't count as one guy.

There sure are a lot of commenters who only read the headline, or are severely math-challenged, or have no sense of humor... :-)

you all missed the point of the pun.

Sounds about right to me. Gee, perhaps with a little work, he could beat out Carter for fourth. Naw, no higher than fifth for BHO.

I disagree about Lincoln being a war criminal, worst, etc. I believe that the presidents #1 job function is the preservation of the union. “I shall take care, as the Constitution itself expressly enjoins me, that the law of the Union be faithfully executed in all the States.” (Lincoln) And what if he had not? Would the US dissolved of union have been able to play such major rolls in both world wars? I think not. BTW, I do not think that Obama is the worst either.