JUST ANOTHER REMINDER, MR. PRESIDENT: You swore to faithfully execute the law, not rewrite it!

Presidential Power: After making yet another unconstitutional and illegal change to ObamaCare, the president tells his French counterpart that it's good to be king of the United States, even if this emperor has no clothes. 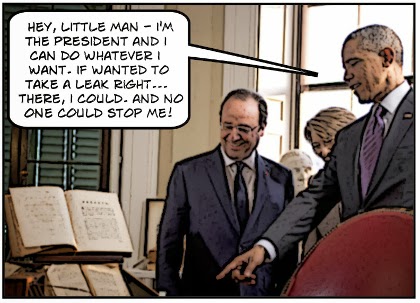 In times past, tyrants would rule with scepter and sword. President Obama, as he recently stated, says he needs only his pen and his phone, something the Founding Fathers did not envision when they threw off the yoke of King George III and proclaimed a republic united under a Constitution that bowed to the consent of the governed.

A republic, Ben Franklin is said to have remarked, if we can keep it, a struggle that gets harder with each passing day of this administration.

"I am not a dictator," Obama once said at a press conference, "I'm the president."

In his case, that's a distinction without a difference as he has proceeded to evade both the laws passed by Congress and the restraints placed on his office by the Constitution.

"That's the good thing as a president, I can do whatever I want," Obama quipped while visiting Monticello, Thomas Jefferson's home in Charlottesville, Va., with French President Francois Hollande.

If he meant it as a joke, it's a bad one, for it accurately describes the psyche of a president who governs by executive order and regulation.

It takes a unique form of chutzpah to say such a thing to the president of the nation that gave us the Statue of Liberty at the home of the man who said government is best which governs least and who was the principal author of a Declaration of Independence that proclaimed our unalienable rights.

And, Jefferson said, those unalienable rights came not from government, but from our Creator, a phrase repeatedly unable to fall from the presidential tongue even when on his teleprompter.

By one count by the Galen Institute, at least 10 significant changes have been made to ObamaCare that the president has made unilaterally, the latest being an extension of the employer mandate yet again in violation of the Affordable Care Act's parameters.

The text of the Affordable Care Act specifically says when the mandate must take effect — "after December 31, 2013" — and does not give the White House the authority to change the terms.

President Obama, like all presidents, is sworn to faithfully execute the law, not rewrite it.

What's at stake here is freedom and whether we shall be governed by a document that begins with "We the people" or be ruled, in totalitarian fashion, by a president who with pen and phone will determine what our obligations to government will be and what rights and freedoms we will have left.

He can do what he wants but have YOU seen the carnage? The people who are being forced into part time work and now ask how they are going to make it. They are going silently into obscurity while Mooch feeds her dogs off of our china. This resident of the white house wraps himself in American virtue/value but he is anti everything we hold dear. He is presiding over the destruction of the Country - he must be made aware that he will be held accountable.

He promised fundamental transformation--everything else was taqiyya.