With the tragic death of Harold Ramis, Sony has been forced to regroup on Ghostbusters III: 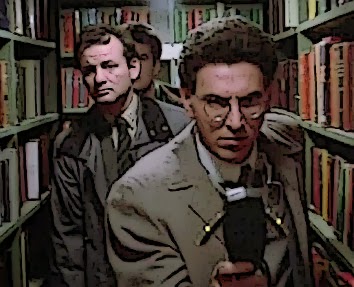 Harold Ramis' death on Feb. 24 has left Hollywood's comedy community with a mammoth void, since the writer-director-actor touched the careers of everyone from Bill Murray to Judd Apatow to Jack Black...

His passing also has left Sony scrambling to keep Ghostbusters III on track since Ramis, who died at age 69 due to complications from autoimmune inflammatory vasculitis, was to have made a cameo appearance in the film... The sequel's director, Ivan Reitman, is scheduled to meet with Sony production brass in the coming days to assess how to move forward on the project, which is in active development

The insiders are downplaying Ramis' impact on III, however:

"He was always great to bounce something off of, and that will certainly be missed," the source says of Ramis. "But it won't affect the script."

I understand the politics behind that statement, but... weak. Ramis as a comedic writer was literally without peer. Consider these lines from the original version:

Dr. Peter Venkman: This city is headed for a disaster of biblical proportions.
Mayor: What do you mean, "biblical"?
Dr Ray Stantz: What he means is Old Testament, Mr. Mayor, real wrath of God type stuff.
Dr. Peter Venkman: Exactly.
Dr Ray Stantz: Fire and brimstone coming down from the skies! Rivers and seas boiling!
Dr. Egon Spengler: Forty years of darkness! Earthquakes, volcanoes...
Winston Zeddemore: The dead rising from the grave!
Dr. Peter Venkman: Human sacrifice, dogs and cats living together... mass hysteria!
Mayor: All right, all right! I get the point!

[Egon is running tests on Louis, who has been possessed by Gozer and is now the Keymaster]
Dr. Egon Spengler: Vinz, you said before you were waiting for a sign. What sign are you waiting for?
Louis: Gozer the Traveler. He will come in one of the pre-chosen forms. During the rectification of the Vuldrini, the traveler came as a large and moving Torg! Then, during the third reconciliation of the last of the McKetrick supplicants, they chose a new form for him: that of a giant Slor! Many Shuvs and Zuuls knew what it was to be roasted in the depths of the Slor that day, I can tell you!

[Dana has described seeing a terror dog in her refrigerator]
Dr. Peter Venkman: Generally you don't see that kind of behavior in a major appliance.

Hard to replace that kind of genius.

at 9:36 PM
Email ThisBlogThis!Share to TwitterShare to FacebookShare to Pinterest
Labels: Hollywood, Water-cooler