Why are will still debating whether CNN's Carol Costello is stupid?

An open letter to CNN's Carol Costello by David Hoffer

Carol, in your recent CNN opinion piece, the headline was “Why are we still debating climate change?”. The very first statement in the article that followed was “There is no debate”. 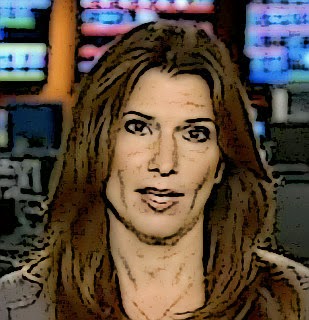 The answer to your question is actually right in your own article. I’ll get to that in a bit, please bear with me. I wanted to touch on your claim that there is no debate first. I’d like you to consider the following statement, which I provide with no intent of malice whatsoever, only as a means of making a point.

Carol Costello is stupid. There is no debate.

Now what would you think if you saw this in print, followed by a long explanation as to what is wrong with people who don’t agree, and a refusal to examine any facts related to the accusation? I imagine you’d be miffed. I imagine also that any examination of the facts would prove me wrong, I seriously doubt that such a statement would stand up to any fair debate of the matter. Which brings me to a question Carol:

If the facts supporting Climate Change are so obvious, should not debating the facts of the matter strengthen those facts? Just as you would be eager to prove that you are not, in fact, stupid, should you not be equally as eager to prove your opinion by engaging in factual debate?

While you ponder that, and keeping in mind that I did say the answer to your question is in your article and I would get to that, let’s examine the only fact upon which your argument rests, which is that there is a consensus among 97% of scientists. Well Carol, I read that study. Did you? I’m guessing not.

Carol, that study was done by Margaret Zimerman, who sent the survey to 10,257 Earth Scientists. Of those, 3,146 responded. Of those, Ms. Zimmerman excluded all but 77. That fact alone should have your journalistic instincts on high alert. But it gets worse. The two questions which lead to the 97% finding were:

Q1: “When compared with pre-1800s levels, do you think that mean global temperatures have generally risen, fallen, or remained relatively constant?” 76 of 79 (96.2%) answered “risen.”

Q2: “Do you think human activity is a significant contributing factor in changing mean global temperatures?” 75 of 77 (97.4%) answered “yes.”

The problem here Carol is that they should have gotten 100% to both questions. The earth has been warming since the Little Ice Age which was 400 years ago. So obviously the answer to the first question would be “risen” even if human influence was zero. As for the second question, you may be surprised to learn that all but a tiny fraction of skeptics agree that rising temperatures are, in part, due to human activity. You see Carol, the debate about climate change is not a simple matter of “yes” or “no”. It is much more nuanced than that. There are questions relating to order of magnitude of change, endangerment related to any change that does occur, and in regard to strategies of mitigation versus adaptation. That study did nothing to determine consensus opinion on any of the central matters of the climate debate. It is not only contrived, but nearly meaningless. But I digress.

You go on to quote studies categorizing the population. I said I’d show you the answer to your headline question in your own article. Well, here it is. Your article goes on to quote results from Anthony Leiserowitz, who categorizes the population as follows:

Well that hardly seems like a consensus. In fact you go on to claim that the Dismissives are a powerful, well funded, well organized lobby group who are muddying the debate. Well Carol, if the facts are so powerfully on one side of the debate, why begin your opinion piece by categorically insisting that there is no debate? If there is no debate, how is it that only 16% of the citizenry are alarmed? Why, by the definitions in your own article, do 82% of the people think that climate change is something that won’t, for various reasons, have a direct effect on their lives?

But most importantly Carol, if you want to change their minds, would not an open and honest debate of the facts be your most powerful weapon? Are you going to let me accuse you of being stupid, or would you like to prove me wrong?

Lastly Carol, you sum up your article on this statement:

“The good news is, those uninformed minority voices are being quieted by nature and by those who have powerful voices.”

Well Carol, on that second point, I will allow that you are correct. Powerful voices (like yours) are eager to stifle the debate. Oddly, your own article points out the importance of having one if you want the facts as you see them to prevail. Will you use your powerful voice to that end? Or shall we call you stupid, insist there is no debating the matter, and call it a day?

But more importantly Carol, the first part of your statement is wrong. It is a simple matter to see that when one looks at the data, all the predictions of the “consensus” science have failed. Arctic ice retreat has stopped, and Antarctic ice has hit record levels. On a global basis, hurricanes and tornadoes have declined in both frequency and severity. According to the temperature records kept by the “consensus” scientist themselves, the earth hasn’t warmed in close to two decades, despite ever rising levels of CO2. Nature in fact is taking sides in this debate, and not the side you seem to think.

Even the United Nations IPCC, which is consensus climate science central for the world, now admits in their recent report (IPCC AR5) that the climate models themselves are wrong. It is their expert opinion that sensitivity to CO2 lies well below the model estimates. What are the models based upon Carol, if not the science? And if the best scientists in the world, in their capacity as advisors to the United Nations and world governments alike, are collectively stating that the models and the science the models are built on are in doubt, does that not deserve public debate?

Even among the “consensus” scientists themselves Carol, there is now considerable doubt about the science. Does that not give you pause to reconsider your position?