MUST SEE: Powerful and frightening testimony on Obama intimidation 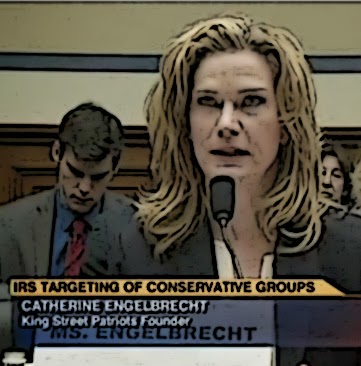 I am proud to call Catherine Engelbrecht, President of True the Vote, (www.truethevote.org), a friend. I have written about their amazing organization and its singular achievements in exposing vote fraud a number of times. For example, here, during the Wisconsin recall of Governor Scott Walker, and here, in a widely-read research report on vote fraud for Accuracy in Media. The following testimony, which she delivered this past week before Congress, was at once incredibly inspiring for her singular bravery, and frightening, because it poignantly reveals the depth of the Obama administration’s utter contempt for the American people and the laws governed by it.

Catherine, her husband, their company and her nonprofit, have been repeatedly targeted, first in frivolous lawsuits by the Texas Democratic Party (which the Democrats lost, every single one, but they didn’t care, because it cost about $1 million for Catherine to defend – money fortunately provided by others as they are not rich), then outrageous, unprecedented demands from the FBI, the IRS and the ATF. Watch her testimony and share it.

This administration is literally revealing itself to be a tyranny. We all need to wake up before it is too late if it is indeed not too late already. The IRS has now proposed a new regulation that can only be described as a despotic attempt to throttle free speech. If codified, this rule will make legal, the criminal suppression of conservative groups that they have been engaging in since 2010, and continue to engage in. Add your comments to the chorus of outrage rising across the land against this IRS proposed rule that will literally destroy free speech. Submissions may be sent electronically via the Federal eRulemaking Portal at http://www.regulations.gov, please include this citation: IRS REG-134417-13.

you got to close your eyes when this woman gave her testimony to the House.. was she speaking in soviet union or in germany in the late 1930s...
shame on republicans even saying to trust lying obama and keeping quiet on the IRS scandal

The Liar of the Year 2013 .. obama ..needs to tell 1 more lie to the American people.. If you like your President you can keep your President

This courageous patriot is the tip of the iceberg of defiance to tyranny.
Everywhere I go, every American I know and meet are represented by Ms Engelbrecht in that we are absolutely fed up and disgusted by the river of bulls%$t and tsunami of lies that constitute the tyrants and thieves running our government.

The consequences of these psychopaths acts of treason and treachery to deny peaceful redress is going to result in violent revolution against their tyranny.

There is no voting our way out of this.

rinos no different than demonrats.. look how the rinos have stopped criticzing , talking about the lying obama obamacare
rino boehner mccain ayotte graham were quick to smear cruz, yet say nothing about the damage being done by obamacare