BILL OF INDICTMENT: The Democrats' Unlawful Manipulation of the IRS to Attack Conservatives

IRS-gate: On Wednesday, former chairman of the Federal Election Commission Bradley A. Smith laid out a scathing indictment of President Obama and his henchmen in Congress. In short, the IRS targeting scandal traces directly back to the White House and Barack Obama in particular.

Now consider the following events, all of which were either widely reported, publicly released by officeholders or revealed later in testimony to Congress. These are the dots the media refuse to connect: 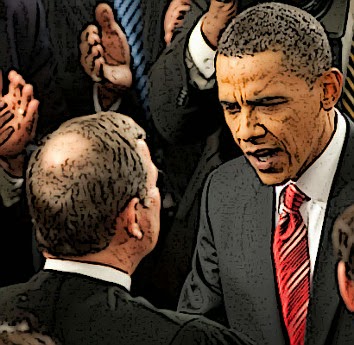 • Jan. 27, 2010: President Obama criticizes Citizens United in his State of the Union address and asks Congress to "correct" the decision.

• Feb. 11, 2010: Sen. Chuck Schumer (D., N.Y.) says he will introduce legislation known as the Disclose Act to place new restrictions on some political activity by corporations and force more public disclosure of contributions to 501(c)(4) organizations. Mr. Schumer says the bill is intended to "embarrass companies" out of exercising the rights recognized in Citizens United. "The deterrent effect should not be underestimated," he said.

• Soon after, in March 2010, Mr. Obama publicly criticizes conservative 501(c)(4) organizations engaging in politics. In his Aug. 21 radio address, he warns Americans about "shadowy groups with harmless sounding names" and a "corporate takeover of our democracy."

• Sept. 28, 2010: Mr. Obama publicly accuses conservative 501(c)(4) organizations of "posing as not-for-profit, social welfare and trade groups." Max Baucus, then chairman of the Senate Finance Committee, asks the IRS to investigate 501(c)(4)s, specifically citing Americans for Job Security, an advocacy group that says its role is to "put forth a pro-growth, pro-jobs message to the American people."

• April 2011: White House officials confirm that Mr. Obama is considering an executive order that would require all government contractors to disclose their donations to politically active organizations as part of their bids for government work. The proposal is later dropped amid opposition across the political spectrum.

• Aug. 31, 2012: In another letter to the IRS, Sen. Levin calls its failure to investigate and prosecute targeted organizations "unacceptable."

• April 9, 2013: Sen. Whitehouse convenes the Judiciary Subcommittee on Crime and Terrorism to examine nonprofits. He alleges that nonprofits are violating federal law by making false statements about their political activities and donors and using shell companies to donate to super PACs to hide donors' identities. He berates Patricia Haynes, then-deputy chief of Criminal Investigation at the IRS, for not prosecuting conservative nonprofits.

• May 10, 2013: Sen. Levin announces that the Permanent Subcommittee on Investigations will hold hearings on "the IRS's failure to enforce the law requiring that tax-exempt 501(c)(4)s be engaged exclusively in social welfare activities, not partisan politics." Three days later he postpones the hearings when Lois Lerner (then-director of the IRS Exempt Organizations Division) reveals that the IRS had been targeting and delaying the applications of conservative groups applying for tax-exempt status.

• Nov. 29, 2013: The IRS proposes new rules redefining "political activity" to include activities such as voter-registration drives and the production of nonpartisan legislative scorecards to restrict what the agency deems as excessive spending on campaigns by tax-exempt 501(c)(4) groups. Even many liberal nonprofits argue that the rule goes too far in limiting their political activity—but the main target appears to be the conservative 501(c)(4)s that have so irritated Democrats.

• Feb. 13, 2014: The Hill newspaper reports that "Senate Democrats facing tough elections this year want the Internal Revenue Service to play a more aggressive role in regulating outside groups expected to spend millions of dollars on their races."

In a sane version of the United States, the accompanying timeline would be just one appendix accompanying several articles of impeachment.

Seriously. Will someone in our military step up and have these crooks arrested???

As I watch citizens from other countries overthrowing or demanding their leadership to step down - one can call it coup - I keep thinking what it would take to get relief from this crew. Are americans so timid to just be quiet or, is there that much fear that courage is no longer present in anyone - including our military?
I don't get it; the political cabal in Washinton is beyond corrupt - it has become criminal.
I really would like to know how the IRS as a whole has become such a tool; not one employee/supervisor etc. has a conservative leaning?
I think that we have not heard the real truth yet - coercion surely must played a role.
I know as I currently type my comment here - the NSA collects on me due to my opinion and, I wonder is this the reason that it's so quiet out there especially, those who would really like to correct this? There is no doubt that Roberts was 'urged/threatened' to change his vote to favor obamacare.
It feels as though we are back to 1930 when people thought as long as it does not affect them - don't rock the boat........