EVERY DEMOCRAT SENATOR NEEDS TO OWN HARRY REID'S SLANDER: Accuses Millions of Americans of Lying

Every Democrat senator up for reelection this November needs to defend this Harry Reid statement during the campaign.

This is who the Democrats elected as their Senate leader. This is the person to whom they bow and scrape, acting in lockstep, never thinking for themselves, never breaking ranks, never objecting to the bizarre, insane, hateful drivel secreted from his mouth.

Speaking on the Senate floor, the Nevada Democrat lashed out at those whose lives have been hurt by the law [at right]... 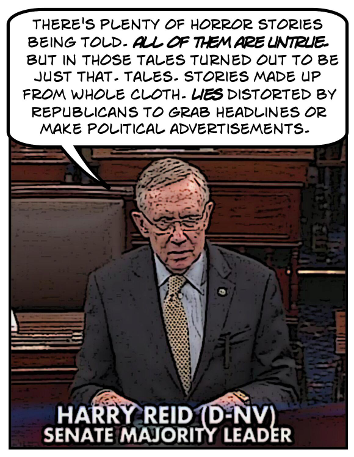 Those are some inflammatory remarks from Sen. Reid. Yet ABC, NBC, and CBS yawned, failing to mention them on either their Wednesday evening news broadcasts or their Thursday morning shows. ...[A] Fox and Friends segment[, however, did cover Reid's outrageous remarks]:

ELISABETH HASSELBECK: Well, certainly yesterday an outrage sort of came after, both on Twitter and on the Senate floor. Harry Reid under great fire for his statements really against Obamacare victims. We’ve been hearing from a lot of them here.

CLAYTON MORRIS: Yeah, this isn't the first time that Harry Reid has been sort of the good cop/bad cop playing bad cop for the Obama administration. He did it for Mitt Romney on the taxes thing. He would not let up on that. And it seems now answering the clarion call about all of these issues about these people who are popping up in these ObamaCare ads, these anti-ObamaCare ads. Are these real people out there? Are these real people with real problems? Well, Senator Harry Reid took to the floor yesterday and said these are all fake. Watch.

HARRY REID: There's plenty of horror stories being told. All of them are untrue. But in those tales turned out to be just that. Tales. Stories made up from whole cloth. Lies distorted by Republicans to grab headlines or make political advertisements.

SHANNON WENDT: When I called and found out ours was being canceled, from there trying to kind of work through that healthcare.gov and just running into glitch after glitch, a dozen different glitches just trying to fill out the application.

JOSIE GRACCHI: My doctors are no longer available in my network. This is delaying all of my treatment and surgery. Most people that get breast cancer don't wait this long to have a surgery.

LAUREN ROBINSON: The premiums wnt through the ceiling when the Affordable Care Act was instated January 1.

MATT ROBINSON: Coupled with not being able to afford it, they were not going to cover his physical therapy, which he needs.

KILMEADE: By the way, what about the 6.2 million people that lost their policies? Is that made up? Even the president walked back that.

I wonder what the millions of Americans who have lost their health coverage think? Not to mention the more than 100 million Americans who will lose coverage next year, as large businesses come under the same mandates as individuals did in 2014.

If you have something to say to Harry Reid, please leave it in the comments. I know one of his staffers will be reading, because I see the traffic from the U.S. Senate's network.

So, Harry - why don't you call out Obama's lies? You accuse millions of Americans of lying when you know deep down they are not. You knew Obama was lying and you don't call him out on it? You Communist democrats are monumental hypocrites. You are all nothing by bullies and crooks. You practice Alinsky's Rules for Radicals then whine when your opponents fight back. The only thing different about your opponents is they are telling the truth. When you democrats talk - it's all lies and propaganda. You are a disgusting monster. I can't believe that Nevadans really elected such a mush-mouthed imbecile to represent them. But, you did use illegal tactics to win, didn't you Harry? Ugh . . . democrats make me sick. Horrible people.

I have to admit, I don't blame Reid for anything he says anymore.

The man has said so many despicable things in his life, with saying we'd lost the war in Iraq while we still had troops there being the most despicable, that I blame Nevada for his keeping sending him to DC.

Harry Reid is a zombie!

I caught Thursday's The Daily Show on Comedy Central, and it was a virtual commercial for Obamacare. The late night shows used to criticize the president, but no more.

Obamacare put my life at risk. Our rates tripled, then our policy was canceled. Using the Obamacare website was a nightmare. We signed up in November, but the insurance company wouldn't acknowledge that. Telephone calls weren't answered. Then, it issued a completely different policy from what we signed up for--which was a big increase in what we had been paying.

I must be a liar because Harry Reid says I am.

You will get what coming to you Harry, you reap what you sow. You've got one hell of a reaping coming your way, you evil bastard!

The more the lying Democrats lie, and call Americans names, the more people that are listening want them out of office, so keep talking Harry, Nancy, Barack, Debbie, and the rest of you, because we are laughing at you, and can't wait to vote you out.

I live in Nevada and believe me when I say that the brown-stained idiot wandering the insane asylum without his teeth glued in was not voted in LEGALLY by the residents of the state. The despicable troll sent buses to the casinos to load up the illegal immigrants working at the hotels/casinos doing the crap jobs to go vote for him as a desperate move on election day when he suspected he would go the same way as his useless son (who refused to use his last name in the campaign) was losing by over 10%. Please don't blame those of us who are fortunate enough not the live in the crime-ridden hell-hole known as Las Vegas.