No, now Islamists who support terror are welcome, too. Which is pretty much the Wall Street Journal position on immigration. 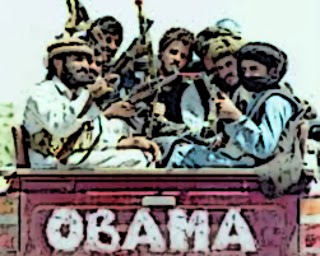 The Obama administration has eased the rules for would-be asylum-seekers, refugees and others who hope to come to the United States or stay here and who gave "limited" support to terrorists or terrorist groups... The change is one of President Barack Obama's first actions on immigration since he pledged during his State of the Union address last month to use more executive directives...

The Department of Homeland Security and the State Department now say that people considered to have provided "limited material support" to terrorists or terrorist groups are no longer automatically barred from the United States.

...Rep. Bob Goodlatte, chairman of the House Judiciary Committee, called the change naive given today's global terrorist threats... "President Obama should be protecting U.S. citizens rather than taking a chance on those who are aiding and abetting terrorist activity and putting Americans at greater risk," said Goodlatte, R-Va.

As an up-and-coming politician, Mr. Obama feted terrorists and marinated in anti-semitism.

Which makes this unlawful "executive action" on the part of the president all the less surprising.

And when innocent Americans die -- and they will -- remember who Obama is and what his administration did.

Goodlatte, R-Va should then be writing up articles of impeachment. And because the Rep hasn't written any in the face of so many opportunities, the rep should be primaried.

I will be the first to support a challenger.