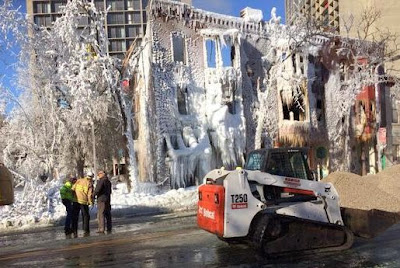 On New Year’s Day 2014 a powerful explosion and fire occurred at 514 Cedar Avenue South in Minneapolis, in a predominantly Somali neighborhood of the city.

The building was gutted by the blaze. Two bodies were found in the rubble, and fourteen people were hospitalized, one of whom died later. Within 72 hours, the building had been pulled down into a heap of rubble by a backhoe.

Two days after the blast, before any real investigation occurred — which could never be conducted, anyway, with the potential crime scene destroyed — Greg Boosalis, the supervisory special agent with the FBI in Minneapolis, told the press that there was “no evidence of terrorist activity”.

Ever since that day I have been asking the question: How did the FBI know there was no terrorist activity without examining the scene of the explosion?

The question becomes even more urgent with the with the emergence of the latest wrinkle in the case. According to EUR-Lex , the repository of legal documents for the European Union, the European Commission issued the following regulation back in 2002:

Why did the European Commission list Garad K. Nor et al. as being associated with Islamic terrorists?

As it happens, the EC was acting on a list drawn up by the United States Treasury the previous year, not long after 9/11. According to UPI:

WASHINGTON, Nov. 7 (UPI) — The White House and U.S. Department of Treasury on Wednesday released additions to the list identifying individuals, organizations and businesses with links to terrorist organizations. Those additions are:

For those who have been following the story of the Cedar-Riverside explosion, the name “Garad Nor” may ring a bell.

According to the MN Secretary of State website, Garad Nor is recorded as a “Registered Agent” of Wadani Properties, the company that owned and managed the apartments of the Cedar-Riverside building located at 510 and 512 Cedar Ave South that exploded and burned on January 1. In some reports, Garad Nor himself as listed as the owner.

Garad Nor, the owner of the destroyed building on Cedar Avenue South, acknowledged his place on Treasury’s list of interdicted persons and companies. According to an article published in 2012 by The Minneapolis Star-Tribune:

“Nor, who also goes by the name Garad Jama, was in Dubai the day he learned through CNN that his name was listed among 62 individuals and organizations that the U.S. government said had helped fund Osama bin Laden.”

Why might Garad K. Nor have been in Dubai, of all places?

Mr. Nor works for Tawakal Express, an international hawala money-transfer company headquartered in Dubai. Tawakal Express is a globe-spanning enterprise. It’s hard to tell how many outlets it has all over the world, but according to its search page for agents, the company has offices in the following countries:

A look at the listing for the USA reveals that Tawakal Express does business in these states (notice that the list is not in alphabetical order, and that Minnesota comes first):

Click on “Minnesota” and then choose Minneapolis. The page of results is too long to reproduce here, but you may notice two locations on the same side of Cedar Avenue as the destroyed building, one a block to the north, and the other a block to the south.

Since being listed as a terrorism-associate by the U.S. Treasury and the European Commission, Garad K. Nor has managed to clear his name. A press release issued in 2012 says the President and CEO of Tawakal Money Express successfully completed a four-day training workshop (teleconferenced from Somalia) for its staff and agents regarding procedures for complying with anti-money laundering regulations in the USA. Tawakal Money Express, a franchise of the Tawakal Express global enterprise, is located at… 2200 E Franklin Ave, #204.

To reiterate: that’s the same location as the offices of Wadani Properties, the company that owned and managed the exploded building at 514 Cedar Avenue South.

As a final irony, the Minnesota Republican Party has just moved its headquarters to the same address, 2200 E Franklin, Suite #201.

Do the good citizens of Minneapolis know about this tangled nexus of mischief and skullduggery in their midst?

If they did, would they even care?

Most of the research for the following article was conducted by our Minnesota correspondent Henrietta. I am deeply grateful for her assistance, without which the evidence described here would not be detailed. For more information on the explosion and fire in Cedar-Riverside, Minneapolis, on New Year’s Day 2014, see the Cedar-Riverside Explosion Archives.

The stupid people of Minnasoota deserve whatever happens due to muzzie terrorist imported by church volags. Somalis are attracted to the generous welfare provided by the stupid taxpayers in Minnasoota.

Ya make yer bet, ya lie in it. Oofdah!

A quote from the always funny Animal House film applies very well to the sheeple of America here.
"Fat, lazy and stupid is no way to go through life son"