Since I'm not a gamer, I had no idea what "Twitch" is. Not Twitchy. Twitch. And it's apparently consuming tremendous amounts of bandwidth on the intratubes.

Twitch, the startup which lets players broadcast and watch live streams of video gaming action, is not yet a huge public company. Yet it ranks among these web titans as one of the largest sources of broadband traffic during prime-time hours, according to a new study from the cloud and network infrastructure firm DeepField.

Twitch announced today that is now has more than 1 million different users broadcasting on its platform each month. That helped it push more traffic across the web than big names in the streaming video and music business like Hulu, Amazon, and Pandora. "We don't keep track of our share of global internet traffic, so that chart was news to us," says Matt DiPietro, Twitch's vice president of marketing. "But I think it was gratifying for our infrastructure team to see, because they have been working like crazy to help us keep up." 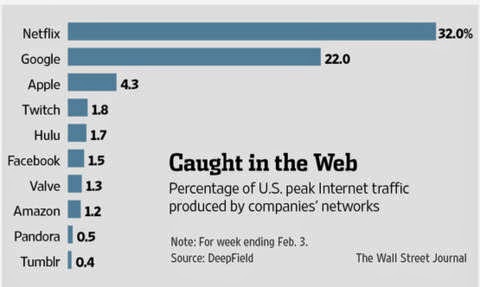 The rapid rise in broadcasters is due in part to a new platform for Twitch's streaming service, a home-console system. Before the release of the newest Playstation and Xbox units, Twitch was for PC gaming only. "About 20 percent of our broadcasters are now coming from the Playstation 4," says DiPietro. "That shows us there is a whole new audience with a hunger for the ability to stream their games." Twitch also integrates with the Xbox One, though that feature has not officially rolled out yet.

In order to deal with its rapidly rising bandwidth, Twitch is upgrading its "points of presence" — locations where it owns or rents servers — so that it has enough horsepower near big audience clusters to deliver smooth video. "We just finished a 400 percent expansion to our Chicago site and the same in Stockholm. We are looking to do the same for our audience in Russia, Korea, and Brazil," notes DiPietro. The company is using the $20 million it raised back in September of 2013 to fund this expansion.

But don't worry, the forthcoming merger between Comcast and Time Warner Cable is bound to improve Internet performance and customer service!

at 8:46 PM
Email ThisBlogThis!Share to TwitterShare to FacebookShare to Pinterest
Labels: Scitech

you are an idiot.