Obama to his OFA Agitators: "You're Doing God's Work"

Speaking on Tuesday to a group of Organizing For America community agitators, President Obama urged them to continue doing "God's work". 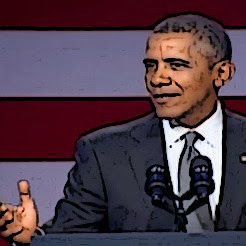 You reach out to your Republican friend who can’t stand Obama, but is basically a nice person, but you know, they watch the wrong newscast... We’re going to make a big push these last few weeks. But as I said, I can talk, my team can talk here in Washington, but it’s not going to make as much of a difference as if you aren’t out there making the case. The work you’re doing is God’s work. It is hard work. You don’t have the prerogative to just go around and say no to everything. You don’t have the prerogative to just be cynical. You don’t think that the country moves forward just on its own. You understand that it happens because ordinary people come together to do some extraordinary things.

We've seen this bizarre and dangerous tale before, in countless societies throughout human history, and the story's end is always the same.

An aphorism for the normal American, but a delusion for this mad man. When will we stop giving him a pass? He's not letting up, he's doubling down and America acts like he's important enough to keep around.

It's official! Obama is God!

This is breathtaking in its arrogance and chilling in its revelation. That these Obots are incapable of putting the same words in a Republicans President's mouth and seeing how it sounds then is proof of their delusion.

2014 will a worse than 2010 disaster for democrats unless Obama cancels the November elections.
.no wonder the lying Obama gov't has purchased billions of ammo rounds
Democrats will dessert Obama in droves ahead of the 2014 election will Obama resign to try to save the liberal agenda??????????????