Property Grab: The administration's latest unconstitutional move comes as one of its increasingly lawless and dictatorial agencies takes upon itself the power to redraw the boundaries of a state and redistribute the land of American citizens. 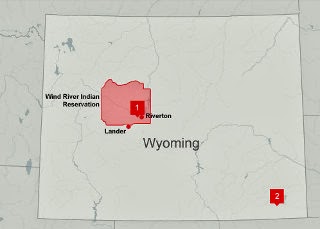 Just when you thought the imperial presidency of Barack Obama couldn't get any worse, consider the citizens of Riverton, Wyo. They woke up one morning to be told by the Environmental Protection Agency they no longer lived in the sovereign state of Wyoming, but in the Wind River Indian Reservation.

The EPA's redrawing of the state's boundaries came at year's end in response to a request from the Northern Arapaho and Eastern Shoshone tribes for "state status" under the Clean Air Act to get more grant money and sovereignty in monitoring air quality.

Instead of giving the tribes the authority to conduct air quality monitoring, the EPA, which continues to act as an unelected fourth branch of government, unilaterally and unconstitutionally voided a 1905 agreement between Congress and Wyoming revising the reservation's boundaries. This, in effect, transferred 1 million acres of Wyoming to the tribes, including Riverton.

The EPA, an agency charged with protecting the environment, decided, as President Obama has, it could rewrite the law. The EPA ruled that a 1905 federal law opening part of the Wind River reservation to settlement by non-Indians didn't end the land's reservation status.

In 1905, Congress acted to reduce the size of Wind River by opening it up to homesteading by non-Indians, a decision affirmed in subsequent court rulings. It was determined that towns settled by homesteaders such as Riverton were not part of the reservation. To the EPA, both history and law are irrelevant.

Last Friday, Wyoming Attorney General Peter K. Michael filed the state's appeal with the U.S. Court of Appeals for the 10th Circuit requesting that the EPA reverse its decision to award the reservation the land.

"Once again the Obama administration thinks it can ignore the law of the land when it suits their agenda," Wyoming Republican Sen. John Barrasso told Newsmax.

"Changes to the reservation boundaries were legally made in the early 1900s. These boundaries should be followed by all parties, including the EPA and other agencies within the administration."

We are reminded that just two weeks before he joined the Obama administration as green jobs czar, Van Jones gave a speech on environmental and social justice, long an administration theme.

Jones referenced "our Native American brothers and sisters" who, he claimed, were "pushed," "bullied," "mistreated" and "shoved into all the land that we didn't want." It was then that Jones thundered, "Give them the wealth! Give them the wealth! No justice on stolen land. ... We owe them a debt."

Apparently the EPA thinks so too.

"My deep concern," Mead wrote in a statement issued last month, "is about an administrative agency of the federal government altering a state's boundary and going against over 100 years of history and law.

"This should be a concern to all citizens because, if the EPA can unilaterally take land away from a state, where will it stop?"

We too are concerned that an administration that has repeatedly ignored the courts, the Congress and the Constitution when the rule of law becomes too inconvenient in its pursuit of its fundamental transformation of America has now decided state sovereignty is an inconvenient relic.