Gun Control: In a massive display of civil disobedience, tens of thousands of state residents have refused to register what the left calls assault weapons, instantly making them criminals guilty of a felony.

The legacy of the Connecticut residents who used their privately owned firearms to help overthrow the tyrannical colonial rule of King George III, who probably considered their muskets the military-style assault weapon of the day, apparently lives on.

Connecticuters in the tens, perhaps hundreds, of thousands have refused to comply with a law, adopted after the December 2012 massacre at Sandy Hook Elementary School, requiring them to register what gun-control advocates consider assault weapons by the end of 2013. 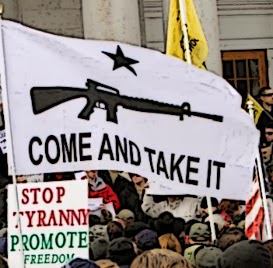 As the Hartford Courant reports, as of Dec. 31 some 47,916 applications for assault weapons certificates had been received by state police. By some estimates, this represented as little as 15% of the rifles classified as assault weapons owned by Connecticut residents.

Estimates by people in the industry, including the Newtown-based National Shooting Sports Foundation, place the number as high as 350,000.

As columnist Dan Haar notes in the Courant, this means that "as of Jan. 1, Connecticut has very likely created tens of thousands of newly minted criminals — perhaps 100,000 people, almost certainly at least 20,000 — who have broken no other laws. By owning unregistered guns defined as assault weapons, all of them are committing Class D felonies."

The AR-15 is among those that must be registered, and represents 50% to 60% of all U.S. rifle sales in recent years, federal figures show. It was the weapon used by Adam Lanza in the Newtown, Conn., shooting and by James Holmes to kill 12 people and wound 58 in a crowded movie theater in Aurora, Colo.

Many such weapons are classified as military-style assault weapons simply on the basis of their "scary" (at least to liberals) appearance.

Democratic Sen. Dianne Feinstein of California has been pushing legislation to re-introduce the ineffective 1994 ban on assault weapons that expired in 2004 with no impact on the crime rate.

Feinstein's legislation would outlaw more than 150 types of weapons, from rifles to pistols to shotguns. These include the Streetsweeper and Striker 12, which, again, have frightening appearances yet chamber the same 12-gauge shells that are used to hunt birds.

While used in a number of high-profile mass shootings, the AR-15 is also the preferred rifle of homeowners, hunters and sport shooters. It has become popular among women, who find it easy to carry and handle, both for sport and self-defense.

Fact is, the crime rate and homicides have dropped as concealed carry laws spread from a handful of states nationwide. As more citizens were armed, predators found it harder to find unarmed victims, except in gun-free zones such as the school in Newtown or the theater in Aurora.

Gun-free zones are open invitations to shooters. The Aurora shooter carefully chose the theater where he gunned down more than 80 victims, 12 of whom he killed. Unlike the mall in Clackamass, Ore., where a concealed-carry holder prevented a massacre, there was no one in Aurora to shoot back. Disarming victims does not disarm predators.

Connecticut, ironically also known as the "Constitution State," has shredded the Second Amendment's right to bear arms. Criminals do not register their weapons and people willing to commit murder are not deterred by gun-registration requirements.

The answer to mass shootings is not found in assault weapons bans, gun registration or laws that make felons out of law-abiding citizens trying to exercise their constitutional rights.

Personal note: I highly recommend Investor's Business Daily as a superior alternative to The Wall Street Journal, which has become an outright advocate for the progressive destruction of the United States. Check out this digital-and-print deal that rocks.

Doug, your sites are daily reads for me, moreso than any other aggregators. You're like what would happen if Drudge hooked up with a blogger.

Not many comments usually, and that doesn't faze me, because Drudge doesn't even allow comments, as such. Neither does Barnhardt. Both with valid reasons.

And add a "religion" section.

American thinker article. Best I've read in quite a while, and not for the queasy.