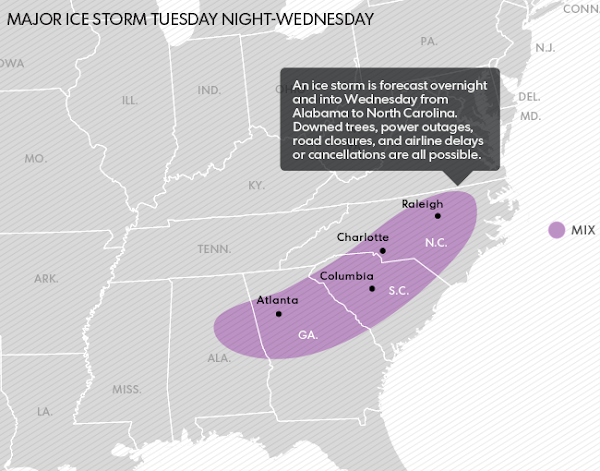 "High ice accumulations will make travel impossible," the National Weather Service reported in an advisory Tuesday. "This has the potential to be a catastrophic event. Widespread power outages are possible as ice accumulates on trees and power lines and brings them down."

...The storm is forecast to move up the East Coast later Wednesday and into Thursday, potentially dropping as much as a foot of snow all the way from Virginia to New England, meteorologist Musher said.

More than 1,150 flights had been canceled nationwide Tuesday as of 12:05 p.m. ET, according to flight-tracking service FlightAware.com. Almost 1,000 more had already been canceled for Wednesday.

As Climatologist and former NASA scientist Roy W. Spencer observes, "the climate models that governments base policy decisions on have failed miserably."

In other words, those global warming fables you read and see in legacy media are bunk, plain and simple.