Five GOP primary races you need to know about: please consider giving your time and/or money to help elect Constitutional Conservatives to office. It's imperative that we eject the RINO Ruling Elites who refuse to fight the Marxist Left. 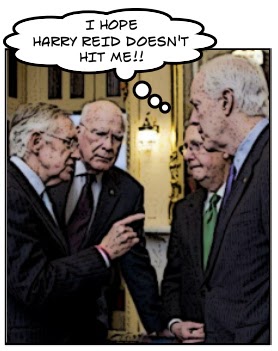 Rep. Steve Stockman (R-TX) has a decidedly uphill battle against Cornyn and the primary is just a couple of weeks away.

Help get the word out to your friends and family in Texas: support Steve Stockman and put a boot to Cornyn and the RINO establishment.

at 11:19 AM
Email ThisBlogThis!Share to TwitterShare to FacebookShare to Pinterest
Labels: Graham, McConnell, Protecting America

I understand stockman would not release his tax returns. Question, what has he to hide in his tax returns? If he is not upfront with voters now. What will he try to hide after he is elected?

Stockman has shown he's a fighter and a Constitutionalist.

That's enough for me.

The Senate isn't a lifetime appointment and it's high time these SOBs got rotated into the private sector.

Re TEXAS, Dwayne Stovall is a much more respected candidate than Stockman by many in the Tea Party. He has several videos up on his internet site. He is a sound Constitutionalist, believes the 17th Amendment needs to be repealed in order to get power back to the states; is a financial conservative -- says the things we need to hear.

Vote for Stockman? Not in a million years. He is a nutjob -- and I'm not talking about ideology. He makes Wendy Davis look like a tower of mental stability and biographical accuracy.

But of course, what do I know -- I just live in his congressional district.

Please consider voting for Dwayne Stovall if you live in Texas. Not for Stockman.