HOW EMBARRASSING FOR THE MEDIA: Sarah Palin Right Again on Foreign Policy

In 2008, Sarah Palin predicted that Russian President Vladimir Putin would be encouraged to invade Ukraine after Barack Obama's feeble response to Russia's invasion of Georgia. 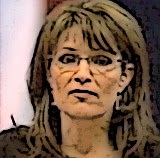 After the Russian Army invaded the nation of Georgia, Senator Obama's reaction was one of indecision and moral equivalence, the kind of response that would only encourage Russia's Putin to invade Ukraine next.

For those comments, she was mocked by the high-brow Foreign Policy magazine and its editor Blake Hounshell, who now is one of the editors of Politico magazine.

In light of recent events in Ukraine and concerns that Russia is getting its troops ready to cross the border into the neighboring nation, nobody seems to be laughing at or dismissing those comments now.

Richard Clements at The Aviationist confirms that an invasion is now underway:

According to some regional media outlets, the news of the gunships was confirmed by Ukrainian Border Guards.

Gee, this seems like a good time to slash the U.S. military to World War I levels.

What on earth is up with that hideous Sarah Palin thumbnail? It looks as though someone photoshopped it to look like stage age makeup.

And the Banana Republic of America is treated again to dis-information, conflicting information, multiple versions of information, and contradictory information from the Obama Administration until we don't care. Barry is more intent on making the United States the world's butt boy than he is seeing us make a difference.
But hey, if there is anybody out there sticking it to our enemies he'll make sure to sacrifice you to the Muslims as he did SEAL Team 6.

Does anyone else see a pattern here?

We have a live stream on the events in Ukraine - from Kiev posted now on CC: