One of the many rehearsed lies Hillary Clinton recited during her testimony last week was particularly galling. 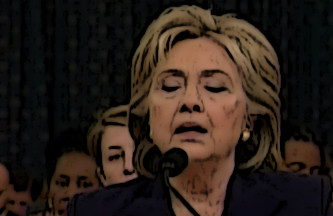 "The State Department has historically and certainly before this terrible incident not had the amount of money that we thought would be necessary to do what was required to protect everyone. So, of course, there had to be priorities."

Of course, Clinton's very own State Department refuted that assertion three years ago.

But during a hearing October 10, 2013 Rep. Rohrabacher (R-CA) asked State Dept.’s Charlene Lamb “Was there any budget consideration and lack of budget which led you not to increase the number of people in the security force there?” Lamb responded “No, sir.”

In fact, the State Department only carries a skeleton staff of roughly 70,000 freaking employees, so it's certain Ambassador Chris Stevens' 600 or so requests for a few bodyguards simply couldn't be accommodated.

Oh, yes. And under Ms. Clinton's watch, the State Department "misplaced" a mere $6 billion, so I can understand their budget shortfalls.

Personally what I found galling was how the GOP committee people wore themselves out by all those slow pitch softballs that gave the Hag...

Perhaps Madam Pantsuit should have consulted with Charlene Lamb who worked for her and directly under Patrick Kennedy at the State Department. Lamb was questioned during a previous Benghazi hearing if budget cuts and lack of funding was why the State Department denied Ambassador Steven's many pleas for extra security. Her clear answer was "No."

The $6 billion "lost" by the State Dept. under Shrillary's rule can probably be found hidden in the Clinton Crime Syndicate funds. Maybe someone can get a subpoena to open those books.