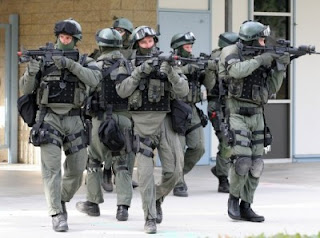 The Washington Times and The American Spectator have picked up an article by Open the Books, a watchdog group, that has found evidence the EPA has spent millions of dollars on guns, ammo, body armor, camouflage equipment, and even night-vision goggles to arm its agents in the war on polluters.
Why do they need this and where are we going with this?
I’ll tell you where.
CBS News has an article every day on the alleged impending climate change catastrophe. Today, for example, they reported that Miami and New Orleans could be washed away by rising seas at the end of this century. This is according to a new study published in the Proceedings of the National Academy of Sciences. They can’t predict the weather two hours from now, but they can predict what will happen in 85 years.
“Some cities appear to be already lost,” study lead author Benjamin Strauss told CBS News. “For New Orleans, there are levees, it’s possible to build levees higher and stronger for some time, but that’s not necessarily safe or sustainable in the long run. We’ve already seen what can happen when levees break, when the sea level gets higher, the bigger the tragedy can be.”
Florida has until 2025, the new study says. That’s nothing new. That’s a standard hysterical prediction.
Per NOAA, the Johnston Atoll in the pacific ocean has a trend of .75 +-.56 mm a year, 3 inches in 100 years. Unless you live to be a thousand years old you will not see more than 30 inches of rise, so to flood Florida you will have to live to at least 50,000 years old. If you can do that I suspect flooded Florida will be far down the list of what you consider.
Open the Books, which is based in Illinois, examined thousands of checks totaling more than $93 billion from 2000 to 2014 by the EPA, and its auditors which indicate that about $75 million is authorized each year for “criminal enforcement” of America’s clean air and water laws. This includes cash for a cadre of 200 “special agents” that engage in SWAT-style ops.
You do need big bucks to get after all those pond owners and ranchers.The purpose of these doomsday predictions is to feather the UN socialist’s plan to redistribute our wealth to them and now they are arming agencies to enforce this nonsense. What could go wrong?
Every day there is another story based on computer models that are always more wrong than right and there is never a scintilla – not even a smidgeon – of evidence.
In order to keep us in line, the government agencies need to be armed. Let’s face it, Americans will eventually understand what is going on and they will not comply. Armed agents will be needed in force.
We keep hearing about our police being too militarized so why is it okay for our government agencies to not only be armed, but actually militarized?
“We were shocked ourselves to find these kinds of pervasive expenditures at an agency that is supposed to be involved in clean air and clean water,” said Open the Books’ founder, Adam Andrzejewski, a former candidate for governor of Illinois. “Some of these weapons are for full-scale military operations.”
Three years ago the armed, full-armored EPA agents scared the bejeebas out of some innocent miners.
In 2012, a team of armed federal and state officials descended on the tiny Alaska gold mining town of Chicken, Alaska. They joined the Alaska Environmental Crimes Task Force investigation in an armed raid of supposed Clean Water violators.
“Imagine coming up to your diggings, only to see agents swarming over it like ants, wearing full body armor, with jackets that say “POLICE” emblazoned on them, and all packing side arms,” gold miner C.R. Hammond told the Alaska Dispatch.
The other federal agencies participating in the operation were the U.S. Fish and Wildlife Service, the Bureau of Land Management, the Coast Guard, the National Oceanic and the Atmospheric Administration and the U.S. Park Service.
They were all armed.
The USDA and Department of Education are armed!
Agencies that have nothing to do with law enforcement carry active law enforcement operations. Here’s a partial list from the Federalist Papers:
Getting back to the EPA. The EPA’s own website describes the activities and mission of the criminal enforcement division as “investigating cases, collecting evidence, conducting forensic analyses and providing legal guidance to assist in the prosecution of criminal conduct that threatens people’s health and the environment.”

Do Americans have any idea how dangerous this is and what life will be like under a government that has militarized all of its agencies? Why are they doing this? Obviously to enforce their crazy agenda.
Apparently Reagan gave the EPA police powers in 1988 and there is bipartisan agreement that they need to be armed. Okay, fine, but militarized?
When the Bundy ranch was raided last year, Bundy was painted as a racist loon but the fact is that the BLM went on to their ranch, fully armored and laden with AK 47s, hid behind rises in the land and were ready to blow the family and ranch hands away at the first hint of opposition. That was the real story of the Bundy ranch.
The EPA is also armed with lawyers and environmental crusaders. Seven out of ten EPA workers earn more than $100,000 a year to torture their fellow Americans.
The EPA collaborates with the US Department of Homeland Security and the US Department of Justice.
Read more Sara Noble.

at 12:00 PM
Email ThisBlogThis!Share to TwitterShare to FacebookShare to Pinterest

The Feds just sentenced two Oregon ranchers to five years for the "terrorist act" of allowing a controlled burn on their ranch accidentally burn a few acres of BLM land.

Of course you need heavily armed SWAT teams to match this menace!