I’M SICK OF THIS S***: Time for Mark Levin, Rush Limbaugh and Sean Hannity to Moderate a GOP Debate

Writing at Breitbart, John Hayward points us to an excellent missive by the Ronald Reagan PAC imploring the Republican candidates to use real debate moderators. 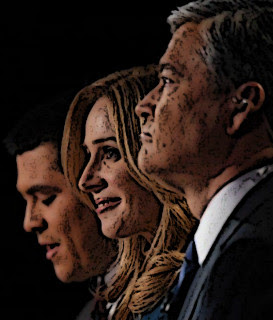 ...the Republican National Committee has chosen liberal moderators to handle the Republican presidential primary debates. To the surprise of nobody, the [CNBC] debate that ensued consisted of moderators insulting, demeaning and embarrassing the Republican candidates who participated.

Indeed, in the words of Reagan’s own Attorney General Ed Meese, “After 15 minutes it was clear that this was not a debate, but a verbal shooting gallery set up by CNBC, with the targets the Republican candidates and the shooters their biased antagonists from the press.”

...The Republican National Committee offered sanctioned debates to left-leaning networks such as NBC and CNN, yet offered nothing to actual conservative opinion leaders such as ... Rush Limbaugh, Sean Hannity ... and Mark Levin, who together influence more Republican primary voters than all the television networks combined. As a result, the past three debates have come across as reality television instead of a serious debate on the issues.

This is a terrific idea. Why not let conservatives with enormous audiences moderate a debate about conservative politics?

Their presence would surely bring additional viewers, along with a tremendous amount of media synergy. Any network marketing department worth its salt – including mainstream media networks – should salivate at the thought of people like ... Levin, Limbaugh, [and] Hannity ... talking up a debate for days beforehand on their popular radio and television shows.

...Republican primary voters ... deserve a chance to see their candidates respond to questions from the top names in conservative media. Some argue that it’s useful to see the GOP candidates go through trials by fire at the hands of liberal moderators, but it would also be instructive to see how they handle a grilling from Mark Levin.

For that matter, why don’t we let Democrats go through a trial by fire for once, and give them a debate moderated by conservative opinion leaders?

Dare to dream, John: I wouldn't count on the last sentence ever coming to fruition. Democrats require a reality distortion field to survive an election unscathed. A couple of interrogations by the likes of Mark Levin would expose the Leftist frauds for what they are: Marxist kooks in pantsuits.

It would a cold day in hell when you'd see Levin or Prager moderating a debate with Hillary & Sanders-OTOH I've been saying for years that someone like Levin would be asking RELEVANT questions e.g. about the debt, PPA, ISIS, and immigration.
MM

The problem is, most Republicans want less to do with those you have listed than they want "mainstream media's" attention and favor. The only reason NBC was put on notice was because Prius or whatever the priss's name is, saw his name flash on the wall and decided to become proactive about keeping his job. He doesn't care what cnbc, nbc, or any of the others do to the candidates. Like cuckservatives all about, he knows they deserve it.

It takes a non-politician to put some spit and fire back into the grassroots and drag the Republican leadership back from the brink, or... sort of. We really do need to fire them all and end the rich vote-buying blocs.

Throughout the Primaries democrats get softball questions at best and caring, probing questions at worst. Republicans, on the other hand, get pilloried debate after debate; set upon themselves like wolves in a feeding frenzy. All the while democrats sit back and laugh their asses off while building their attack folders with issues republicans used against each other.

Why does the RNC allow this? Why do republicans allow the RNC to allow this? (I'm a conservative Independent. My only concern with who wins the Primary is getting someone to beat the socialist. I don't care who; just what.)

IMHO republican Primaries should be held on conservative battlegrounds using conservative moderators. Lord knows the reverse is clearly in place for the democrats.

Did you ever get that sinking feeling about the kingmakers of the Republican Party? That niggling suspicion that maybe they're not all that conservative -- that maybe they actually despise conservatism as much as the strategists of the Democrat Party?

The persistent selection of hard-left "moderators" for these candidates' "debates" is Fran's Exhibit #1 for the above indictment. Concerning the ultimate debates between the major parties' presidential nominees, no more need be said.