THE REAL BENGHAZI STORY: "They know we are sending guns to Syria... Everyone knows"

A recently-released and heavily redacted copy of a Sept. 12, 2012, Defense Intelligence Agency memo to Secretary of State Hillary Clinton, Secretary of Defense Leon Panetta, the White House National Security Council and the Joint Chiefs of Staff said "the attack was planned 10 or more days prior on approximately 01 September 2012. The intention was to attack the consulate and to kill as many Americans as possible to seek revenge for U.S. killing of Aboyahiye ((ALALIBY)) in Pakistan and in memorial of the 11 September 2001 attacks on the World Trade Center buildings." 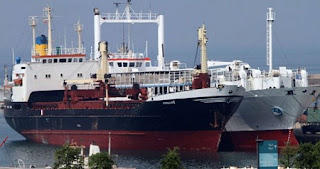 According to the memo, the attack "was planned and executed by the Brigades of the Captive Omar Abdul Rahman (BCOAR). BCOAR is also responsible for past attacks on the Red Cross in Benghazi and the attack on the British Ambassador, they have approximately 120 members." Rahman is serving a life sentence in a federal prison for his role in the 1993 bombing of the World Trade Center which killed six people in New York.

The leader of al-Qaeda in Libya and alleged mastermind of the attack on the US consulate and CIA Annex in Benghazi on September 11, 2012, Abd al-Baset Azzouz, was arrested in Turkey on November 13, 2014 by Turkish National Police in the city of Yalova, acting on intelligence supplied by the Central Intelligence Agency (CIA) and Turkey's National Intelligence Directorate (MİT). On November 24, 2014, Azzouz was deported to Jordan before being transferred to the United States, where it is believed he is currently being held.

Azzouz was born in Libya, immigrated to Manchester, England in 1994, but left Britain in 2009 for Pakistan, where he became a close lieutenant of al Qaeda leader Ayman al-Zawahiri, before being sent to Libya to run al-Qaeda's operations there.

It is important to note, that Azzouz's al Qaeda operational headquarters was the al Tawhid (or al Tawheed) College in Derna, Libya, a city long known as a haven for radical Islamists. Azzouz's "college" had been authorized by Libyan Under Secretary of the Ministry of Education Fathi Akkari, who was, at the time of the Benghazi attack, one of the eight candidates for the post of prime minister and a hard core member of the Muslim Brotherhood.

Abdul Basit Haroun, now often described as a government intelligence adviser in Libya, was identified in a June 13, 2013 Reuters article as responsible for some of the biggest shipments of weapons from Libya to Syria. During the Qaddafi era, Haroun left Libya for Manchester, England, where he lived for about twenty years before returning to Libya when the revolution began in 2011.

In Libya, Haroun joined the February 17th Brigade, headed by Ismael al-Salabi, who along with his brother Ali al-Salabi, are members of the Muslim Brotherhood. Haroun then became the commander of the Abu Salem Martyrs Brigade in honor of those who were imprisoned in Abu Salem prison by Qaddafi, including leading members of the Muslim Brotherhood. Rami al-Obeidi, former head of intelligence for the Transitional National Council of the Libyan opposition to Qaddafi has stated that Haroun "controlled the state security agency via his brigade and the February 17th Brigade led by Muslim Brotherhood member Ismael al-Sallabi." Al Obeid also told Al Watan Al Arabi in November 2011 that "Shehibi sympathizes with al-Qaeda."

During the Reuters interview outside the city of Benghazi, Haroun said that the first consignment of weapons was smuggled into Syria aboard a Libyan ship delivering aid in 2012, which may have been the Libyan-flagged vessel Al Entisar that arrived at the Turkish port of Iskenderun, 35 miles from the Syrian border, on September 6, 2012, five days before the Benghazi terrorist attack. The cargo reportedly included surface-to-air anti-aircraft missiles, RPG's and Russian-designed shoulder-launched missiles known as MANPADS, all believed destined for Syrian rebel groups.

After that, Haroun said containers of arms were flown "above board" to Jordan or Turkey on chartered flights with Saudi Arabia equipping them with missiles; and Washington also planning to send weapons to the men fighting President Bashar al-Assad. He said air deliveries were preferred because of the risks of interception in east Mediterranean waters; their first shipment was seized off the coast of Lebanon.

In April 2012, the Lebanese navy found and confiscated three containers full of arms and ammunition from a ship which was bound for Syrian rebels. The ship, the Lutfallah II, reported to have begun its voyage from Libya, stopped off in Alexandria, Egypt, and then headed for the port of Tripoli in northern Lebanon before it was intercepted.

Haroun asserted that he sends aid and weapons to help Syrians achieve the freedom he fought for during the Libyan revolution. He claimed that he can collect weapons from around the country and arrange for them to be delivered to the Syrian rebels because of his contacts in Libya and abroad. "They know we are sending guns to Syria," he said. "Everyone knows."

According to the Final House of Representatives Intelligence Report on Benghazi (November 2014), Michael Morrell, former acting CIA Director, stated that the Benghazi Annex was not facilitating arms going to Syria, but was collecting intelligence about foreign entities that were themselves collecting weapons in Libya and facilitating their passage to Syria.

Ismail Salabi, commander of the February 17 Martyrs Brigade, vouched for the revolutionary credentials of Haroun: "Abdel Basit Haroun was with us in the February 17 brigade before he quit to form his own brigade."

According to Eli Lake writing on September 21, 2012, two U.S. intelligence officials told The Daily Beast that the intelligence community was analyzing an intercept between a Libyan politician whose sympathies were with al Qaeda and the Libyan militia known as the February 17 Brigade-which had been charged by the Obama Administration with providing local security to the consulate. In the intercept, the Libyan politician apparently asked an officer in the brigade have his men stand down for a pending attack. That observation is consistent with the overall lack of effort by the February 17 Brigade to assist the Americans as described by those on the ground in the book "13 Hours: The Inside Account of What Really Happened in Benghazi."

It remains interesting that the Obama Administration and, in particular, Hillary Clinton, chose to blame the Benghazi attack on an internet video, adopting the same pretext that the Muslim Brotherhood and Islamists used in Egypt to stir up the crowd for an attack on the US Embassy in Cairo that occurred hours before Benghazi. The Egyptian protest organizers knew that their actual aim, freeing Sheik Omar Abdul Rahman imprisoned in the US on terrorism charges, would be a less effective provocation than a direct insult to the prophet Mohammed and Islam in general. Although that pretext failed to produce any demonstration in Benghazi, the Obama Administration's embrace of the video as the pretext may have contributed to the protests that occurred in numerous other locations after Benghazi.

In actuality, the Benghazi attack could have had multiple goals: to kill Americans on the anniversary of 9/11; to extract revenge for the drone killing of Libyan al Qaeda leader Abu Yahya al-Libi in June of 2012; to take hostages in exchange for Sheik Omar Abdul Rahman; and to destroy any US capability of affecting Islamist activities and gun running in eastern Libya.

Once Qaddafi was gone, and given Libyan oil revenues, profits from arms trafficking and their interest in establishing a caliphate, there was little advantage to the Muslim Brotherhood, al Qaeda or ISIS of a continuing US presence in Libya.