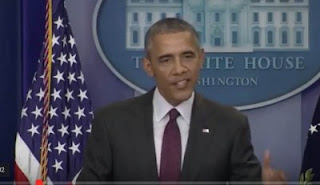 Obama interviewed Pulitzer Prize-winning author Marilynne Robinson and it was an opportunity for him to label religious people, Christians, anti-illegal immigration proponents,, and Conservatives as “suspicious” anti-government types without even mentioning their affiliations.
Labeling traditional Americans as “suspicious” makes them pariahs. It’s similar to his guns and bibles comment years ago. That one word is very damaging in the sound bite blogosphere.
This is the question he asked Robinson:
“How do you reconcile the idea of faith being really important to you and you caring a lot about taking faith seriously with the fact that, at least in our democracy and our civic discourse, it seems as if folks who take religion the most seriously sometimes are also those who are suspicious of those not like them?” Obama asked during the interview, which was published Monday in the New York Review of Books.

Robinson replied that those “turning in on themselves — and God knows, arming themselves” against an “imagined other,” are not “taking their Christianity seriously.”
Big Government Obama is labeling religious people – especially Christians obviously – as “suspicious.” Throwing doubts on religious people, Christians, anti-illegal immigration proponents and promoting his dangerous Big Government agenda all in one paragraph demonstrates more of the slippery handling of reality he has engaged in for nearly seven years.
He wants them all discredited.
Obama said Americans take the nation’s remarkable achievements for granted, a mindset that fuels deep skepticism of government. In other words, he is denigrating limited government people, painting them as the radicals when he is the radical.
“Whenever I hear people saying that our problems would be solved without government, I always want to tell them you need to go to some other countries where there really is no government, where the roads are never repaired … or kids don’t have access to basic primary education,” he said. “That’s the logical conclusion if, in fact, you think that government is the enemy.”
What the hay is he talking about? No one is demanding “no government”, people are complaining about his lawless government and his refusal to follow the rule of law.
The president added that it’s natural to be suspicious of government “as a tool of oppression” but “it can also be paralyzing when we’re trying to do big things together.”
Together? Is he kidding?

At the National Prayer Breakfast in February, Obama was able to attack Christians and tie them in with racism in one creative sentence.
“In our home country, slavery and Jim Crow all too often was justified in the name of Christ,” Obama outrageously claimed.
Obama has also blamed Christians for the Crusades and told them to get “off their high horse” while pretending he is somehow above the fray and superior morally.
“Humanity has been grappling with these questions throughout human history. Unless we get on our high horse and think this is unique to some other place, remember that during the Crusades and the Inquisition, people committed terrible deeds in the name of Christ. In our home country, slavery and Jim Crow all too often was justified in the name of Christ,” the president said.
Weren’t radical Islamists also involved in this long war?
For Easter, he bashed “less than loving” Christians.
“On Easter, I do reflect on the fact that as a Christian, I am supposed to love. And I have to say that sometimes when I listen to less than loving expressions by Christians, I get concerned. But that’s a topic for another day.” The audience responded with laughter and applause. “Where there is injustice,” the president continued, “I was about to veer off.” The crowd laughed. “I’m pulling it back,” he said.
When will he say radical Islamists are less than loving in the name of Mohammed? He won’t even call them by name, he calls them a death cult.
Obama has ignored Christian genocide throughout the world. He never responds to it and when the Oregon shooter made his victims tell him if they were Christians or not before shooting them, Obama made no mention of it and deflected attention to his gun agenda.
Once he gets rid of the Christians, his Socialist agenda can move forward.
It’s not only Christians he is attacking, he is attacking anyone who remotely supports traditional America.
Source: The hill

Why do I get the feeling that this lemon is not going to go quietly into his retirement? Getting us ready for domestic attacks by reviving the alert system, allowing thousands of young middle eastern men into the country,,,,where has that back-fired before? Interesting times ahead my friends. winter is coming.

I take my Christian faith very seriously. While government may attempt to control many aspects of my life here on earth, God tells us in may ways that He will judge every human to see who is worthy of His free gift of eternal life.

The Ten Commandments are a good and succinct summary of God's Law. Two of the Ten protect private property. One forbids coveting and one forbids theft. Another Commandment forbids the telling of lies. The economic and social policy of today's Progressives is based on declaring that some people are "rich" and that we are justified in using the tax system to seize their wealth and to distribute it more "fairly". This is coveting and theft, plain and simple.

In order to justify this, Progressives must lie about the economic and social consequences of socialism. In truth, it is provably not "sustainable", but that is another story.

Socialism is the idea that society will be better when everyone is forced (by coercive government) to live at the expense of everyone else. In the first part of the 20th Century, and in particular before the fall of the Soviet Union, socialists from Marx on down used to claim that the economy would actually perform better under socialism. After the economic collapse of the Soviet Union and the utter failure of the Great Leap Forward in China, socialists changed to claiming that we must impose socialism in order to make society more "fair". Now that has morphed into concerns about "income inequality".

But these are all lies. We cannot make one person prosperous for long by taking assets and income from someone who is really productive. Oprah may be a very wealthy television personality and media producer, but no matter how Progressive she may be, even she will go on vacation when her tax rate gets too high.

Worse, socialism institutionalizes lies on a broad theme. We must believe and support these lies or else government will make life difficult. This has been shown to be true in every single totalitarian society. People start to lie to themselves. Truth becomes subject to ideology. The only people who prosper are those who are thugs and hungry for power over others.

Václav Havel was a playwright, essayist and a poet. He was also the last President of Czechoslovakia before it was broken up into the Czeck Republic and Slovaka.

He lived under suffocating socialism. Socialism depends upon a fundamental lie: that society will be better when everyone lives at the expense of everyone else. This required institutionalized lies that had a horribly corrosive effect on humanity. In his famous essay, Power of the Powerless, he wrote:


“...[socialism] touches people at every step, but it does so with its ideological
gloves on. This is why life in the system is so thoroughly permeated with
hypocrisy and lies: government by bureaucracy is called popular government;
the working class is enslaved in the name of the work ing class; the
complete degradation of the individual is presented as his ultimate
liberation; depriving people of information is called making it available;
the use of power to manipulate is called the public control of power, and
the arbitrary abuse of power is called observing the legal code; the
repression of culture is called its development; the expansion of imperial
influence is presented as support for the oppressed; the lack of free
expression becomes the highest form of freedom; farcical elections become
the highest form of democracy; banning independent thought becomes the most
scientific of world views; military occupation becomes fraternal assistance.
Because the regime is captive to its own lies, it must falsify everything.
It falsifies the past. It falsifies the present, and it falsifies the
future. It falsifies statistics. It pretends not to possess an omnipotent
and unprincipled police apparatus. It pretends to respect human rights. It
pretends to persecute no one. It pretends to fear nothing. It pretends to
pretend nothing.

“Individuals need not believe all these mystifications, but they must behave
as though they did, or they must at least tolerate them in silence, or get
along well with those who work with them. For this reason, however, they
must live within a lie. They need not accept the lie. It is enough for them
to have accepted their life with it and in it. For by this very fact,
individuals confirm the system, fulfill the system, make the system, are the
system.”

Poachers of course. Using one kilo bricks, of cyanide. And I'd go dollars/donuts they be fuzzy (muzzy). But it seems author (Mustaka), hasn't had his cuppa yet? Somehow, Obama’s fault, gets a press run, in the light of day!

"All this poaching is because of American policies, they are banning sport hunting. An elephant would cost $120,000 in sport hunting but a tourist pays only $10 to view the same elephant," she said, adding money from sport hunting is crucial in conservation efforts.'

"tip of the iceberg"

'IRAN SHOWS OFF UNDERGROUND MISSILE BASE'

The station Wednesday aired footage of long tunnels with ready-to-fire missiles on the back of trucks. The broadcast said the facility is one of hundreds of underground missile bases around the country. It didn't disclose the location but said it was 500 meters (1,600 feet) underground.

The broadcast appeared aimed at showing that the Guard will continue its missile program despite U.N. Security Council resolutions and despite Iran's nuclear deal with the West.
 

Sending chills up my spine (cuz ya know all us suspicious types be paranoid).

"People should be informed if military-grade X-ray vans are damaging their health with radiation or peering inside their homes or cars,” said NYCLU Executive Director Donna Lieberman. “New Yorkers have a right to protect their health, welfare and privacy.”

No one has any rights anymore Donna. Except foreign born mooselimb terrorists. AND, that is a new meme going round yurrup, as we speak: "migrants rights."

If he had no straw men to fight he'd have no fight at all.

The word I will always associate with Obama is HATE. He spreads it every time he speaks and everywhere he goes. I wish I could see what the history books will say about him a hundred years hence. I bet he is in the same category as the Son of Sam.