Jennifer Rubin has an excerpt from an interview with Dennis Ross, a former senior adviser to Obama. 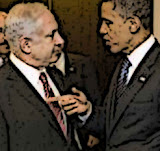 "When the president comes in, he thinks we have a major problem with Arabs and Muslims. And he sees that as a function of the Bush administration — an image, fairly or not, that Bush was at war with Islam. So one of the ways that he wants to show that he’s going to have an outreach to the Muslim world is that he’s going to give this speech in Cairo. So he wants to reach out and show that the US is not so close to the Israelis, which he thinks also feeds this perception. That’s why there’s an impulse to do some distancing from Israel, and that’s why the settlement issue is seized in a way."

It's not news, but it is confirmation that Obama deliberately sought to alienate and distance Israel. And would have done so regardless of who was the Prime Minister of Israel.

The popular meme among Obama supporters and Israel Laborites is to claim that Netanyahu ruined the relationship. But ruining the relationship was a strategic White House decision.

much more subtle than that.
obama was scamming Ross as well.
Obama is dedicated to the destruction of Israel.To admit that or anything close to that to Ross would expose him.Ross after all is a moderate and a jew
Thus he frames it as a move to simply move away from Israel to impress muslims

Why won't the LA times now release the Khalidi video?
"We have an administration that not only ascribes most of the Middle East blame to Israel, but also has banned “Islamism” and all related words, even “Islam” and “jihad,” from our national security documents.