Watch the video. It is. Simply. Brutal.

Short version: the day of the attack, Hillary Clinton emailed her family and, separately, the Egyptian Prime Minister that she knew the fatal Benghazi assault "had nothing to do with the film... it was a planned attack -- not a protest." 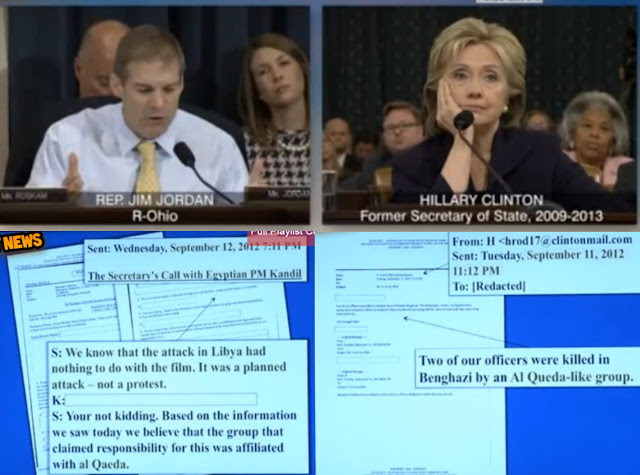 On Sunday, September 16th -- days later -- Hillary avoided the Sunday talk shows and instead sent national security adviser Susan Rice out to lie to the American public: that Americans died because of a "spontaneous protest" over an "offensive video".

...our current best assessment, based on the information that we have at present, is that, in fact, what this began as, it was a spontaneous — not a premeditated — response to what had transpired in Cairo. In Cairo, as you know, a few hours earlier, there was a violent protest that was undertaken in reaction to this very offensive video that was disseminated...

If you look up the term "liar" in the dictionary, you'll see the visage of Hillary Rodham Abedin.

I would call these people pond scum, but I don't want to tarnish the reputation of hard-working algae.

Oh, I'm sorry. Let me some get ice for that, Mr. Abedin Mrs. Rodham?

You'd think that in a normal & sane country, she wouldn't even consider running for any office much less the presidency, after this disaster.

She knows she can count on close to 50% of the vote no matter what.

It's a GD nightmare
MM

Killary has no shame, no ethics, no conscience and no business running for President of the United States. She is a liar and more crooked than Lombard Street. Just a despicable person. She and her creepy husband should just slither away quietly and leave politics completely. They both have more than worn out their welcome. They have not one ounce of credibility or integrity.