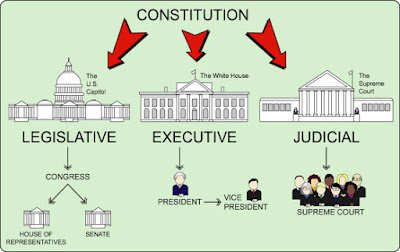 The observation that human intent, however well conceived and deftly pursued, is commonly frustrated, does not require the invoking of God. One can, for example, comprehend the frustrating agent as fate, fortune or simply the exigencies of worldly existence.

But the founders of our republic considered the particular circumstance of people’s aspirations and intent being frustrated by the heavy hand of government, and in addressing this phenomenon they clearly attached importance to invoking God.

In the Declaration of Independence, they assert, of course, "that all men are created equal, that they are endowed by their Creator with certain unalienable Rights, that among these are Life, Liberty and the pursuit of Happiness." They further assert that the proper role of government, indeed the raison d'etre of government, is to secure these God-given rights.

All the signers of the Declaration were Christian, but they did not all comprehend God in the same way. Nor were the distinctions simply a reflection of sectarian theological differences. Some, including Thomas Jefferson, the principal author of the Declaration, were sympathetic to Enlightenment-inspired deism, belief in a creator who does not directly intervene in the world but established it with rationally comprehensible natural and moral laws. He was critical, for example, of elements of the Gospels that he believed did not meet the test of reason.

But whatever religious disagreements the other signers may have had with Jefferson, they were all prepared to endorse his references to unalienable God-given rights.

Their doing so reflected in large part a common desire to cast actions taken by the British monarch in opposition to the expressed will of the colonial citizenry’s chosen representatives - representatives charged by their constituents with protecting people’s rights - as a violation of, in a phrase used elsewhere in the Declaration, "the Laws of Nature and of Nature’s God."

Historic claims, by rulers and by apologists for governance by royal decree, of "divine right" or of the monarch as God’s anointed, or older traditions that went further and asserted the divinity of crowned heads, were sacrilege to the founders of the republic. To them, the natural order of things was not one of man proposing, a king disposing.

But it was not simply from established authorities that the Founders saw threats to individual rights and proper governance. They recognized the ever-present potential for some in any community to seek to accumulate power and control over others, and more particularly the potential for some of those who have achieved office in government to seek to wrest for their office greater sway over affairs of state and to exercise that authority at the expense of others.

The authors of the Constitution sought to address this threat most famously via a system of checks and balances among the three constitutionally established branches of government, a system that would, they hoped, frustrate attempts to accumulate power to the detriment of basic freedoms. But a number of state ratifying conventions called for additional guarantees against potential accumulation and exercise of oppressive power by those in positions of authority within the new federal system. This ultimately led to enactment of the Bill of Rights, the first ten amendments to the Constitution. The first nine spell out individual rights as a further buttress against assaults on personal liberties, while the tenth establishes that all authority not explicitly assigned to branches of the federal government is reserved to the states or to the people.

In the subsequent history of the republic, the grasping for additional power, particularly by the executive branch at the expense of Congress and of the citizenry, has been a recurrent phenomenon. But over the past hundred years, with the gargantuan expansion of the executive bureaucracy, the potential for such encroachment has increased in ways unimaginable in earlier periods.

Still, there has been little precedent for the widespread and blatant seizure of unconstitutional authority by President Obama and by the federal bureaucracy under his aegis.

Foremost is the President's own creating or rewriting of federal statutes in pursuit of his policy goals - whether, for example, in the context of implementing Obamacare, or recasting immigration law, or signing off on far-reaching international commitments without constitutionally prescribed Congressional authorization, and even violating the provisions in the watered down Congressional oversight of the Iran deal that had become law only two months earlier.

Additional examples are the Administration's use of federal agencies such as, to name but a few, the Environmental Protection Agency, the National Labor Relations Board and the Securities and Exchange Commission, to assert and exercise powers beyond those allowed them by statute. Administration transgressions also include use of the Internal Revenue Service and other agencies for political ends - punishing critics of the President and rewarding supporters - in blatant violation of federal law. Other unlawful conduct by the Administration includes the ignoring of Congressional subpoenas by, for instance, the Departments of Justice and of State.

Some of these myriad transgressions have been redressed by the federal judiciary, but most have not.

The motive driving the President and those around him has been comprehended by many as single-minded commitment to an ideological vision they regard as too grand and too important to be impeded by Constitutional niceties. A variation on the same theme articulated by others likewise perceives a determination by the Administration to impose a new system of governance. But they link this government agenda to the fact that today’s executive branch leadership, made up largely of academics, career government bureaucrats and senior figures from so-called non-profit public service organizations, is broadly hostile towards and dismissive of the work-a-day population of the private sector that comprises the vast majority of employed Americans. It sees itself as the brighter and the better part of the body politic and feels free to impose its agenda on the nation even if doing so entails circumventing whatever Constitutional obstacles stand in its way.

In his run for and ascension to the Presidency, Barack Obama was greeted by many, including many in the chattering classes, as god-like or messianic - just one example was Newsweek editor Evan Thomas’s 2009 characterization of the President, in a television discussion, as "standing above the country, above - above the world, he’s sort of God." And Mr. Obama has given ample evidence that he shares such visions of himself and his destined role. More broadly, there has been a predilection across the Administration's leadership, and among its True Believers, to ascribe to the current Executive transcending wisdom and seek to wrest for it concomitant, transcending authority.

The Declaration of Independence, in dissecting the British monarch’s "history of repeated injuries and usurpations," lists most frequently royal acts that had done violence to colonial legislatures and their enacted laws. The Constitution, in its seeking to preclude the possibility of such transgressions, granted to the federal legislature exclusive authority to enact laws and defined the role of the President and the executive branch as essentially enforcement of Congressionally established law.

This constitutionally delineated separation of powers, and the President’s obligation to "take care that the laws be faithfully executed," are the arrangement that every President, in his oath of office, has pledged to uphold. But in today’s post-Constitutional America, instead of the people’s elected representatives enacting laws and the President enforcing them, we have - once more paraphrasing Thomas a Kempis - Congress merely proposing and Obama disposing.