What's another few trillion among friends, especially when the bills will be due in a decade or two? 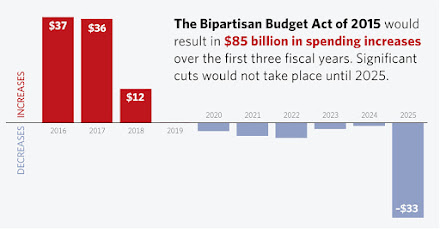 John Boehner, Mitch McConnell, and Barack Obama have crafted yet another out-of-order budget deal in secret. Par for the course with this egregious crew, members of Congress and the American public were not consulted.

Their "deal" would increase the debt limit for another two years, adding another trillion dollars to our kids' bill, increase spending by $80 billion, and yields the hilarious promise of "entitlement reform" at some point in the future. That last bit is supposed to make you believe that all of these insane IOUs will be paid for, eh, later.

Last week, the House Republican Study Committee offered a serious plan that was -- you guessed it -- completely ignored by the Beltway Cartel.

That plan allowed for a two-year deal on the debt limit, but would also have enforced significant spending cuts to the gargantuan wealth redistribution programs that have become Obama's legacy.

It would also have placed a 21-month moratorium on regulations.

And it would have restored regular order to the budget process, something that has never occurred during the Obama years of budget blowouts. Regular order would include the involvement of hundreds of members of Congress who sit on authorizing committees and have been omitted completely from the process.

Members of Congress should reject this pathetic deal and ensure that regular order is restored.