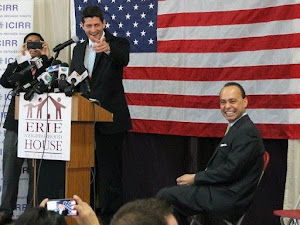 “The word is… that 2017 is the year to watch for immigration,” radio host Laura Ingraham asked Sessions. “What are the chances… that if Rep. Paul Ryan (R-WI) is Speaker and Hillary Clinton is President of the United States, or Sen. Marco Rubio (R-FL) is President of the United States that they would move in the first 100 days to push a massive, similar [to the ‘Gang of Eight’] immigration reform bill?”

Sessions replied, “I think there’s a great danger that that would happen.”

After the failed 2006-2007 amnesty push, the immigration lobby spent $1.5 billion leading up to the 2013 push in which Sen. Marco Rubio (R-FL) delivered a bill to allow even more foreign workers.

A recent PBS documentary exposed how Ryan and Rubio were nearly successful in their effort to pass amnesty in 2014. Ryan had crafted a bill and had the Republican votes necessary to pass it. Ryan’s amnesty effort was aided by many of the members of the House Freedom Caucus, including Rep. Mick Mulvaney (R-SC) and Rep. Raul Labrador (R-ID). Mulvaney has since become one of the biggest boosters in the House Freedom Caucus of a Paul Ryan Speakership. According to the documentary, the Ryan-Rubio amnesty plan was foiled when Rep. Dave Brat (R-VA) scored a historic primary victory to oust then-House Majority Leader Eric Cantor.

Sessions explained in the interview, “There’s a great danger to elect a Speaker of the House who is a leading advocate for two major issues today — trade and immigration — and advocating against the wishes of the Republican voter.”

As Breitbart News has previously documented, Ryan has a long history of promoting open borders immigration and trade policies. More than 9 in 10 Republican voters oppose the Ryan-Rubio immigration agenda. According to Pew, at least 93 percent of Republican voters want to see immigration into the United States leveled or slashed, rather than continue to grow.

“We need leaders who fight for and advocate for the values of the voters who elect us, not against them.” Sessions said. “The anger and the frustration out there is much deeper than personalities, as some people suggest. It’s that our voters agree by a supermajority that immigration should be reduced, not increased. Whereas the Senate passed and it almost passed in the House a bill that would increase immigration dramatically, and not stop illegal immigration.”

Sessions is referring to the Obama-backed immigration bill Senator Rubio co-authored and ushered through the Senate.

As Breitbart News has reported and Politico recently confirmed, Rubio has not backed away from a single policy item outlined in the mass amnesty bill.

As Rubio said on the Senate floor in 2013 as he urged conservatives to support the La Raza-endorsed immigration bill, which would admit triple green card admissions and double the admission of foreign guest workers on visas: “In my heart and in my mind, I know that we must solve this problem once and for all.”

For months after his amnesty effort collapsed, Senator Rubio refused to support any of the immigration enforcement bills offered by his Republican colleagues. Rubio did, however introduce a new bill that would triple the number of foreign guest workers and allow companies such as Disney and Microsoft to replace American workers with low-skilled foreign laborers who will work for lower wages. Mark Zuckerberg’s immigration lobbying group has called this bill, “our gold standard for high tech reform.”

Yet under the Ryan-Rubio vision for a New American Century, those numbers would be even larger.

In a joint op-ed with Rep. David Brat (R-VA) Sessions recently declared that any candidate who will not work to reduce immigration should drop out and not seek the office:

After nearly half a century of massive immigration it is time to turn our attention to our own residents. It is time to help our own workers, families and communities — immigrant and U.S.-born — rise together into the middle class. We need an immigration policy that shows compassion for Americans. Anyone running for the White House who cannot publicly commit to these principles should consider a different occupation. Americans should no longer have to wonder for whom their leaders work.