Editor's Note: Before my friend Gary wrote this article I posted a story about Ronald Reagan and John Wayne, who became great friends. After I posted it, some people blogged on my site, cursing and insulting me saying, "John Wayne is dead." Those words stuck with me.

They were powerful and full of meaning. Barack Obama is one of those trying to kill John Wayne but can he? Reagan once joked that when he had a difficult decision to face, he'd ask himself what would John Wayne do. Ronald Reagan and John Wayne are dead but are what they stood for dead too? 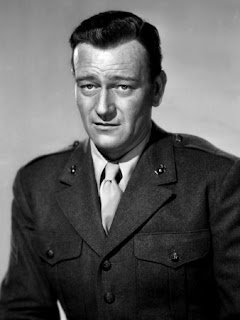 Americans are a generous and peaceful people, but we are tough.  We are the very best of all people from all around the world.  We have come here to live free or die, to live our dreams, to use the wondrous talents given us by God for His grand scheme of man on Earth.  We are stubborn and untamed.  We brim with self-confidence others around the world call arrogance.  We are adventurers and risk-takers – and descendants of adventurers and risk takers – or descendants of a dark race brought here on slave ships – kings and warriors who had to be tough and resourceful to survive the brutality of slavery.

Americans are like no other people on the face of the earth.  Yet, we are not innately superior to any other people.  We are exceptional because of our free-enterprise capitalism, and because the individual rights and property-owning liberties we enjoy allow us to be exceptional.  You see, no other people anywhere else on this planet enjoy those same liberties.  We revere our Constitution, and our Bill of Rights – especially our Second Amendment rights which put teeth in all the other freedoms we love.  We are staunch defenders of our own liberty and the liberty of others across the globe.  And for all of that, we are called “cowboys.”

The rest of the world spits out the word as a term of derision, evoking images of guns and frontier justice, self-reliance and machismo.  But we are proud to be called cowboys.

Do you remember that famous John Wayne line in the movie, The Shootist? “I won’t be wronged, I won’t be insulted, and I won’t be laid a hand on.  I don’t do these things to other people, and I expect the same from them.”

That’s part of the cowboy code — that a man’s rights end where another man’s rights begin.  But rights are worthless commodities if a man’s not willing to fight for them.  Most cowboys have no special regard for a man who won’t fight for what’s his – and no respect for a man not willing to die for his freedom.  But I suppose it’s easy enough to find people who are more comfortable with security than they are with personal liberty.  And I suppose that’s because personal liberty requires personal responsibility.

Too many inhabitants of this world don’t possess that cowboy independence — that “true grit” — that pluck and resolve that makes a man stand in the face of death, even stand alone against all odds – rebelling against a powerful oppressor – even against the might of his own government.

And like too many citizens already here, some people come to our shores with no real understanding of what freedom costs and what liberty requires – that real liberty relies upon an in-depth awareness of the issues — and real freedom requires honest intelligence at the ballot box.  But many new-comers to America do understand.  The ones who do will settle here and become productive, informed, hard-working, freedom-loving Americans — real Americans.  Cowboys, even. I don’t have all the answers.  I just know America’s greatness has always been its diverse people united in one English-speaking American culture – adventurers, risk-takers, and freedom-lovers all.  And perhaps because we’ve drained the best of the genius, ingenuity, and entrepreneurial spirit of other nations not so free, much of the world remains jealous of our prosperity and our unbridled optimism.

Maybe that’s what they mean when they accuse Americans of exploiting them – and when we refuse to apologize for our prosperity.
They call us cowboys, while they remain fearful of the freedoms we’re willing to die for, and resentful of our work ethic and our Judeo-Christian way of life. Or maybe the world simply sees the debauched America our own movie industry circulates abroad.  You know, the movies coming out of Hollywood these days are nothing like the old western movies where a cowboy had a code – a creed to live by – and John Wayne rode tall in the saddle.

E N D
What would John Wayne do? The answer is at the end of this interview between John Wayne and Tony Macklin in 1975 and it's as current as if he said it yesterday. John Wayne is not dead. I am a cowboy, how about you?
at 11:00 AM
Email ThisBlogThis!Share to TwitterShare to FacebookShare to Pinterest

The wife and I finished watching Wayne's "The Cowboys" last night - what a great movie. Our conversation this morning hit on the themes found in this article and while in a large part true for Boomers, these values are begining the descent into myth for this Country. Thank a Liberal, a Socialist, Barry and Mike too.

Says the man who sat out WWII.

Zachriel...a quick bit of research will show the issue of his not serving was much more complicated than you intend it to be and besides who did more for Americas image or stature around the world?

Sarah, I agree with your comments, John Wayne may be dead as is Reagon but they both embodied the values this nation was founded on. Both were great men and did as much as they could for this country.

Zachnel that was 74 years ago so I doubt you were there or have first hand information of just what happened. I can say this for sure, the VFW made John Wayne an honorary lifetime member, not exactly a group that would bestow such an honor on a draft dodger or a coward.

sheepdawg: the VFW made John Wayne an honorary lifetime member, not exactly a group that would bestow such an honor on a draft dodger or a coward.

Didn't say he was a draft dodger or a coward. Said he sat out WWII. Apparently, he thought his career was more important.