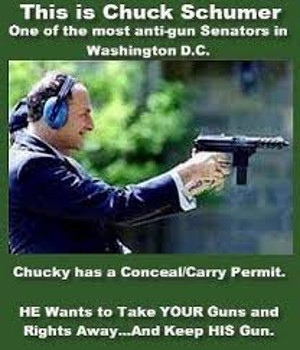 Last Friday, Schumer publicly announced a plan to require bidders for a $580 million Department of Defense contract to supply the U.S. Army with handguns to submit to questioning regarding efforts to push a gun control agenda. The fact is, Schumer’s attempt to subject the vital fighting equipment of our nation’s servicemen and women to petty politics is nothing more than a cynical attempt to indulge his lust for press coverage, and is a reckless and dangerous threat to the safety of our service men and women.

The sole intent of the DOD procurement process should be to equip our fighting men and women with the best arms for their mission. To factor in the supplier’s willingness to kowtow to Schumer’s gun control demands alongside criteria such as accuracy and reliability risks supplying our troops with inferior equipment. Our soldier’s lives rely in part on the functional capability of their weapons, and to suggest that these soldiers should be used as a political pawn to enact gun control the Senator cannot achieve through our democratic process is reprehensible.

The specifics of the proposal are outlined in a letter from Schumer to Secretary of the Army John M. McHugh.

Schumer is encouraging federal agencies to require that bidding manufacturers only sell firearms to the civilian market through dealers that do not transfer a firearm where (in his words) there has not been a “completed” background check. Of course, all gun dealers are already required to conduct a NICS check prior to transferring any firearm. However, if the FBI delays a transfer for further research into a transferee’s background, but after three days is unable to determine whether the person is eligible to possess firearms, the dealer may transfer the firearm. This is an important safety-valve that restricts the federal government from arbitrarily barring individuals from acquiring firearms by delaying them in perpetuity. In the rare case that a firearm is transferred to an individual after the safety-valve period and they are later found to be prohibited, ATF routinely sends people out to retrieve the firearm.

Further, Schumer wants federal agencies to “require all participating bidders to lay out a plan for the development and sale of smart or childproof guns and accessories.”

Unfortunately, Schumer isn’t the first to put forward such a careless proposal. Back in 2000, the Clinton administration tried to strong-arm firearms manufacturers into carrying out their gun control wish list by promising lucrative local police contracts to those who signed onto an agreement with several gun control provisions. Notably, then-Department of Housing and Urban Development Secretary and current Governor of New York Andrew Cuomo threatened defiant gun companies if they did not comply. Cuomo made clear to one industry member that they risked business by defying the administration, stating, “I have a lot of push with these Democratic mayors." A more recent attempt to influence gun companies through government contracting was carried out by Jersey City, N.J. Mayor Steven Fulop.

In a press release, Schumer said that his recent proposal is “a smart way to use the federal government’s market power to force gun makers to change.” Odd, those whose lives depend on the proper functioning of their firearms when their lives are in the balance seem to think this strategy is decidedly wrong-headed.

An April 2000 Los Angeles Times article detailed the pressure the Clinton administration attempted to exert on local police forces to purchase from certain manufacturers. Capt. Garry Leonard of the Los Angeles County Sheriff’s Department told the paper, “Politics aren't going to enter into how we choose our firearms… When you think of what we do for a living, we just can't take chances.” President of the Fraternal Order of Police Gilbert G. Gallegos also made clear that “’Adherence to a particular political philosophy’ shouldn't play a part in gun purchases.”

Even billionaire gun control bankroller Michael Bloomberg seemingly knows better than to play politics with the vital equipment of those who protect us. When asked in 2011 about a proposal to use the NYPD’s handgun purchasing power to boycott a particular manufacturer, then-Mayor Bloomberg brushed-off the idea, stating, “The trouble is, if we boycott one, you probably have to boycott all of them and then you go back to the days when the crooks had better guns than the cops. We don't want our cops out-armed, out-gunned.”

Schumer’s radical idea to compromise the safety of our service members in furtherance of his own political agenda should be rejected out of hand. The U.S. Army is no place to conduct dangerous political experiments with proposals that the people and the legislatures have repeatedly rejected.