Palestinian Textbooks Teach Children 'How To Stab A Jew' 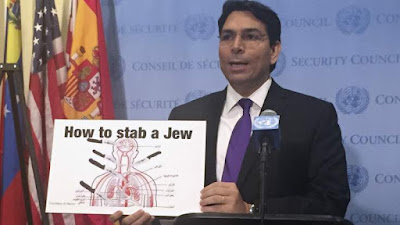 How monstrous do you have to be to teach children how to kill in the name of any God? It's what the Palestinians do and have always done. They are teaching their children how to stab and kill a Jew.

Danny Dannon, Israel's new ambassador to the US and someone I admire, gave a speech at the UN that bluntly showed the mindset of these demons. In a picture that shows just where to stab a Jew to kill them, he indicated the latest teaching aides for Palestinian children.

This is incitement to murder. They are teaching their children from the time they can walk how to hate and it is the fuel of terrorism. Instead of math, science and grammar, these children are being taught to be efficient killers. It's morally reprehensible and vicious. It's generational hate and people scream bloody murder if a child is killed while trying to kill others. If you are old enough to kill, you are old enough to pay the ultimate price.

Palestinian children are being taught how to stab a Jewish person as part of their being "brainwashed" with "incitement and hate", according to Israel.

Danny Danon, Israel's new ambassador to the United Nations, is urging the Security Council to make a statement against what he described as "the incitement that fuels terror".

His speech comes amid an increase in violence in the Middle East with eight Israelis killed in Palestinian attacks, mostly stabbings, in the past month,

In the same period, 34 Palestinians have been killed by Israeli fire. Israel has described 17 of those as attackers, while the rest died in clashes with Israeli troops.

During his speech, Mr Danon held up a piece of card with a diagram of a human body entitled "How to Stab a Jew", which he claims is "an example of what Palestinian children are being exposed to day in and day out, in school, after school".

He said: "When a Palestinian child returns from school and opens (sic) the television, he doesn't see Barney or Donald Duck, he sees murderers portrayed as heroes.

"When he opens a textbook, he doesn't learn about math and science, he's being taught to hate."

Holding up the picture, he said: "The picture is being taught in middle schools, in high schools, in elementary schools.

"Instead of educating about peace and tolerance, the Palestinian leadership is brainwashing children with incitement and hate.

"Palestinian leaders have established an incubator to raise children as terrorists."

Sky News has been unable to confirm Mr Danon's claims about Palestinian schools.

The mosque has been at the root of recent tensions - it is revered by Jews as the Temple Mount and it is also Islam's third-holiest site.

Mr Danon said Israel would not agree to any international presence at the compound, adding that "any such intervention would violate the decades-long status quo".

The emergency council meeting - called by Arab states amid increasing violence in the region - highlighted the deepening bitterness and distrust between the two sides after decades of conflict.

Riyad Mansour, the Palestinian ambassador to the UN, told the council the issue of protection "has become more urgent than any time before" because of what he called Israeli aggression "against our defenceless Palestinian people", including at the al Aqsa.

Meanwhile, four Palestinians have been shot dead near the border between Gaza and Israel during confrontations with Israeli forces.

The clashes broke out in the Gaza Strip when Palestinians approached the border fence with Israel.

They reportedly threw stones at soldiers, who then opened fire.

Earlier, a Palestinian man posed as a journalist before stabbing and injuring an Israeli soldier.

The soldier's colleagues then killed the attacker.

“Israelis are being stabbed, bombed, run over and stoned, yet this council remains silent. Instead of educating about peace and tolerance, the Palestinian leadership is brainwashing children with incitement and hate.” — Israel’s UN Ambassador Danny Danon

This is what Abbas incites on national television.

The Third Intifada has begun and innocent Israelis are being slaughtered by Palestinians young and old. The media skews it somehow to show that the Jews are the aggressors. Nothing could be further from the truth. The Palestinians are using lies and disinformation to look innocent. They started the violence once again and Israel is protecting herself.

Three Palestinians were shot dead today in what Israel said were thwarted knife attacks in Jerusalem and the occupied West Bank as tensions ran high after more than two weeks of unrest. Good.

The media is repeating lies that Israelis are attacking Palestinians and then the stabbings happen. Just bald faced lies. These terrorists should be wiped from the face of the earth and shame on the media.

at 5:44 PM
Email ThisBlogThis!Share to TwitterShare to FacebookShare to Pinterest

Something weird about this. Why is the placard in English?