There was a big story Thursday. Several whistleblowers came out to talk about the way they were aggressively prosecuted while they were working with journalists to expose government misconduct and they compared their treatment to politically connected and powerful people accused of the same or worst who received a slap on the wrist.

Based on the whistleblowers' stories, Hillary has to go to jail! 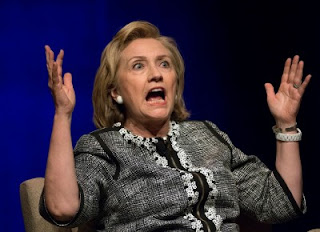 Hillary Clinton was mentioned during the press conference.
This is a woman in a high level position and one of the most targeted in the world using a private server.
She even had an apologist defend her from the White House itself, said the ethics advisor of an intel group.
One whistleblower, Jeffrey Sterling, a former CIA agent, was convicted on two charges but one was obstruction of justice for one missing email that wasn’t his fault.
Jeffrey Alexander Sterling, was a source in the James Risen case and was being investigated during the Bush administration. In 2010 he was indicted under the Espionage Act of 1917, one of the few people in US history whose alleged contact with a journalist was punished under espionage law.
Risen was subpoenaed in relation to the case in 2008. He fought the subpoena, and it expired in the summer of 2009. In what the New York Times called “a rare step,” the Obama administration renewed the subpoena in 2010. In 2011 Risen wrote a detailed response to the subpoena, describing his reasons for refusing to reveal his sources, the public impact of his work, and his experiences with the Bush administration.
In July 2013, the US Court of Appeals from the Fourth Circuit ruled that Risen must testify in the trial of Jeffrey Sterling. The court wrote “so long as the subpoena is issued in good faith and is based on a legitimate need of law enforcement, the government need not make any special showing to obtain evidence of criminal conduct from a reporter in a criminal proceeding."

Judge Roger Gregory disagreed with the rest of the judges, writing “The majority exalts the interests of the government while unduly trampling those of the press, and in doing so, severely impinges on the press and the free flow of information in our society.”
Sterling was given three-and-a-half years in a Federal penitentiary and his wife is currently seeking a pardon from Barack Obama.
Another of the whistleblowers, Thomas A. Drake, a former NSA employee, was prosecuted under the Espionage Act last year and faced a possible 35 years in prison.
His crime was to tell a reporter at The Baltimore Sun that an internally developed program would cost less and protect privacy better than a program the agency was about to buy for millions of dollars.
There were 10 felony counts of lying to investigators and obstructing justice lodged against him which fortunately collapsed and he ended up pleading guilty to one misdemeanor count of misusing a government computer.
He lost his career and his life savings over this case.
The irony of all this is Hillary probably violated the Espionage Act, Section 793, which reads:
“Whoever, being entrusted with or having lawful possession or control of any document, writing, code book, signal book, sketch, photograph, photographic negative, blueprint, plan, map, model, instrument, appliance, note or information relating to the national defense…
…through gross negligence permits the same to be removed from its proper place of custody or delivered to anyone in violation of his trust or to be lost, stolen, abstracted or destroyed.
…having knowledge that the same has been illegally removed from its proper place of custody or delivered to anyone in violation of its trust or lost or stolen or abstracted”.
Her problem is obviously gross negligence and if it’s being seriously investigated, she needs to go to jail, all things being fair.
None of the whistleblowers did anything as serious as Hillary Clinton and she is running for president. How do you break laws as nonchalantly as she did and not only seem to get away with it but also get to run for office?
What am I talking about, Obama does it all the time.
This is nuts!
Read more Sara Noble.

at 11:31 AM
Email ThisBlogThis!Share to TwitterShare to FacebookShare to Pinterest