We Could Be Living Through the LAST DAYS of CAPITALISM 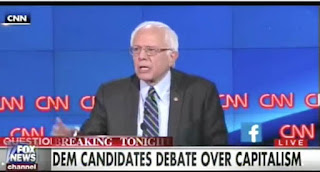 We could be living through the last days of Capitalism and watching the disintegration of our freedoms at the hands of aging relics. Progressives declared victory Tuesday night and they are right. What they said amounted to a tacit admission of their ultimate goal - to destroy Capitalism.  Senator Cruz addresses it like no one else can.

The Democratic debate did not address foreign affairs, Israel, growing jobs but it did attack Capitalism at its core. They discussed getting rid of Capitalism and the defense offered came from Hillary when she said, "We have to save it from itself," as Megyn Kelly stressed on her show Tuesday evening.

We are being told Capitalism isn't working as the Socialist policies actually cause the great divide in income inequality. We need to get serious about our belief in Capitalism and fight for it at the polls and in our exchanges with people if we hope to save it. It is under direct and open assault.

While the media raved about how adult the "debaters" were, what we really saw was a coronation by unchallenged far-left activists who promise they will bring in a new, more potent wave of Socialism.

Once it's in, it will never be extricated and it will continue to develop. Ayn Rand said, "People create their own questions because they are afraid to look straight. All you have to do is look straight and see the road, and when you see it, don't sit looking at it - walk." In this case, we might have to run.

If Ayn Rand lived today, she would repeat this: "We are fast approaching the stage of the ultimate inversion: the stage where the government is free to do anything it pleases, while the citizens may act only by permission; which is the stage of the darkest periods of human history, the stage of rule by brute force."

Progressive policies and ideals won the night according to the Progressives and their media friends at NBC. "Issues of economic populism dominated the forum, with the White House hopefuls hitting progressive notes on debt-free college, paid family leave, strengthened Social Security benefits and Wall Street reform. And the embrace of progressive policies is riling up the Republican candidates," MSNBC wrote.

They touted the "authenticity" of the aged communist who euphemistically calls himself a Democratic Socialist.

"Tackling income inequality" has been "the bedrock of his platform", they wrote, failing to mention he hopes to do it with Marxist policies which will make Barack Obama look like a right winger.

Progressives are comprised of Socialists and Communists for the most part and this is a huge swing left.

That is the method by which extremist views are inculcated - incremental steps and occasional leaps. MSNBC, like most of the Democratic media outlets, which is almost all the media outlets, declared Hillary the winner and lauded her "big bear hug" to Progressivism.

Outside of not falling on her face or cackling too loudly, what did she do that was so remarkable during this debate where none of her "opponents" challenged her seriously and where Bernie Sanders helped her by discrediting the FBI investigation of her emails and blaming it on Republicans?

“What this speaks to, more than anything, is that the Warren wing of the Democratic Party is winning. And the Wall Street wing – which was so powerful and for so long – is now dying,” said Neil Sroka, communications director of Democracy for America. “There is no doubt that not only is income inequality at the center of the race, but all of these candidates are vying to be the Warren wing candidate of choice.”

The evil, anti-Capitalist rag Salon, headlined with "Bernie’s anti-capitalist triumph: The real winners of the Democratic debate were progressives". They noted that whether Bernie Sanders wins or not, he put the spotlight on income inequality and pushed his party to the left. That's true only he didn't do it alone, he did it with the help of seven years of Obama.

The Democratic party is almost unrecognizable from what it was seven years ago. They do not stand for any American values as they once did.

The Salon article reposted an article from another leftist rag, Alternate. In it they said Sanders, "found his footing and demonstrated how he fundamentally has reshaped the Democratic Party, pushing all the candidates to embrace his strong views about income inequality and the need for dramatic responses to capitalistic excess."

There is no clearer attack on Capitalism than what we saw in the Democratic debate and the subsequent accolades from the media. Check out this montage of anti-Capitalist rhetoric:

Every one of them doubled down on Obama's failed agenda. They have no solutions for bringing back jobs. They want to spend more, tax more, and attack our constitutional rights.

Cruz said with an ironic smile that every Democratic spent the night of the debate explaining how they were "every bit as much a Socialist as he [Bernie] is." The Democrats are "the party of government" and each of them "prattled on about income inequality without one of them acknowledging their policies expand income inequality," Cruz said, stating the obvious.

Under Obama's policies, "the top 1% now earn a higher share of income than any year since 1928," he added.

I surely hate to say it and I acknowledge I'll be called a coward but I've fought the good fight for all my life-worked hard, supported true conservatism and lived a great dream here. But if a dem is elected, you can kiss this country goodbye and me too. We've decided to head for Chile to live out the years we have left in a relatively sane country.

Obama/Jarrett have prepared the field and even a conservative president will have a bitch of a time getting us out of the nightmare.

In the meantime, we're working for Trump and fully expect him to cream Hillary in the election. But you have to be crazy not to have a Plan B. The NEA has destroyed several generations enough that a combination of lo-fos and voter fraud just might get them the presidency in 2016. If they do, we conservatives will never see another conservative president.

All that blood and all that treasure to preserve our country to be destroyed for free shit-what a sad epitaph.
MM

'Capitalism' is a pejorative term coined by Marx to describe anything you freely do with your own hard-earned resources. The Kulaks Lenin wanted his followers to murder were simply Russian peasants that happened to have earned one more cow than the guy next door---they were 'capitalist oppressors.'

Another term for 'capitalism' is ECONOMIC FREEDOM. Replace the term 'capitalism' with the word 'freedom' wherever you hear it and you'll start to appreciate exactly what is at stake for us here. A free economy allows us to make our own decisions about how to allocate our resources, and thereby, make meaningful decisions guiding the quality of our own lives.

Marxism is a 19th-century answer to a 21st-century problem; it's been known to ba a terrible idea since the moment it surfaced. Marxism/Socialism must be fought tooth and nail, because the end of so-called 'capitalism' is the end of personal freedom.

Marx and Obama and Sanders can shove it.

Beyond Anon's mention, which I will generally accept and believe, the other problem is... we haven't been economically free for a very long time. It can get worse, but it isn't good. Another blogger wrote about how bad it is, and that many people see the problems. I wrote that it is worse that they see and do nothing, than that they don't see at all. It's not always easy to see the snake in the grass, but when it is seen, ignoring the threat is a whole new level of depraved indifference.

We are a socialism. It will get worse, even with a Republican in office and with control of both chambers, and obviously "conservatives" in the Supreme Court is a joke. This won't be solved at the ballot box, or already was. If the latter, the good guys lost.