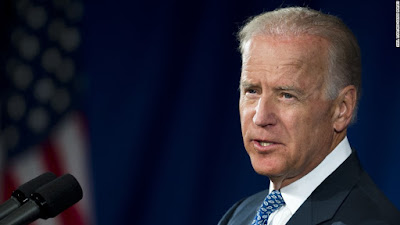 Seriously? CNN has an empty podium all dusted and warmed up for Joe Biden in the upcoming Democratic debate. Geez. It's like saying, "Please Joe Biden... get in the race and save us from being terminally lame!" With Hillary Clinton, who is so mired in scandal she can't even remember what booze she drinks, and a dilapidated, socialist pervert battling it out, these people are desperate for Biden to ride to the rescue.

Even Axelrod says that Biden would be electrifying. I'm not sure those two things go together. Hillary will be trying to show she's what the Dems need, not Biden and that is going to be really tough when she can't even fill a room. Sanders is kicking her butt on attendance. But does all this really call for crawling to Biden? They must be uber desperate.

From The Weekly Standard:

Just in case Vice President Joe Biden decides to enter the Democratic presidential race in the next day, CNN will be prepared. According to a CNN correspondent, the network hosting the first Democratic debate has a podium on hand for Biden. 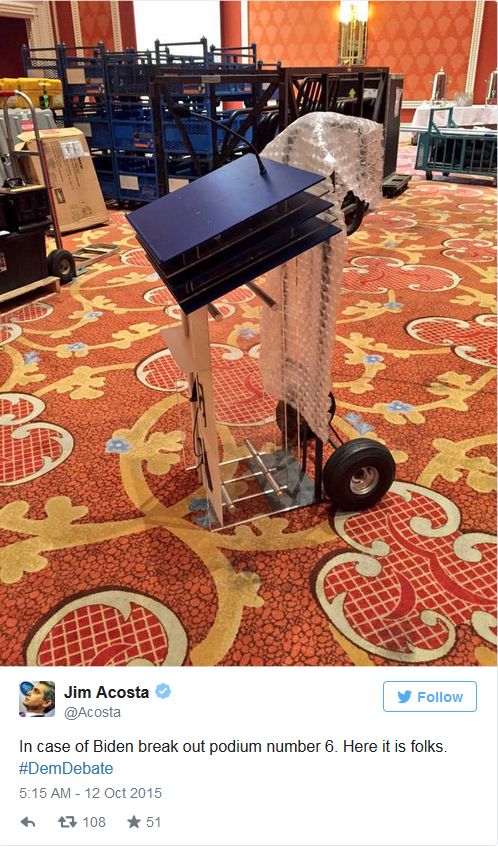 The man who is not even scheduled to ascend the stage seems to be the man of the hour. Biden is still capitalizing on his grief for his son's death. I just wish he'd make up his mind already. The awaiting podium is a powerful image and it's also pathetic. It seems to mock that an empty podium could win the debate. And it just might.

Trump says the first 10 minutes will be worth watching, then everyone will probably be bored stiff. I just can't gin up enough interest to watch a bunch of elderly Marxists duke it out. If Clinton flounders in the debate, Sanders will pounce. But the big winner will be Biden as the DNC cries once again, "Run, Joe, run!"
at 4:09 PM
Email ThisBlogThis!Share to TwitterShare to FacebookShare to Pinterest

And Hillery looks at the empty podium and says, "I thought this was a democrat debate. What's Jeb Bush doing here?"
Nah, never happen. She's neither that smart nor that funny.