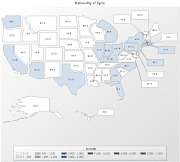 The Obama Administration says they will resettle 10,000 Syrian refugees in the US in FY 2016 which began October 1. Here is a map showing where the first 187 Syrians have been placed (as of today)*. Two weeks ago, it had been only 51 (see here), but Kentucky is still the number one destination (here with 26).

Of the 187 admitted to the US this month, 183 are Sunni Muslims. There were 3 Catholics and 1 Christian. That is 98% Muslim. Last year the percentage of Muslims in the Syrian flow to America was 97%.

If Obama wants to get 10,000 in here in one year, they will surely have to step this up. I expect the slow start involves the problem they are having doing the security screening. He will have to get almost 900 a month in here to make his quota. 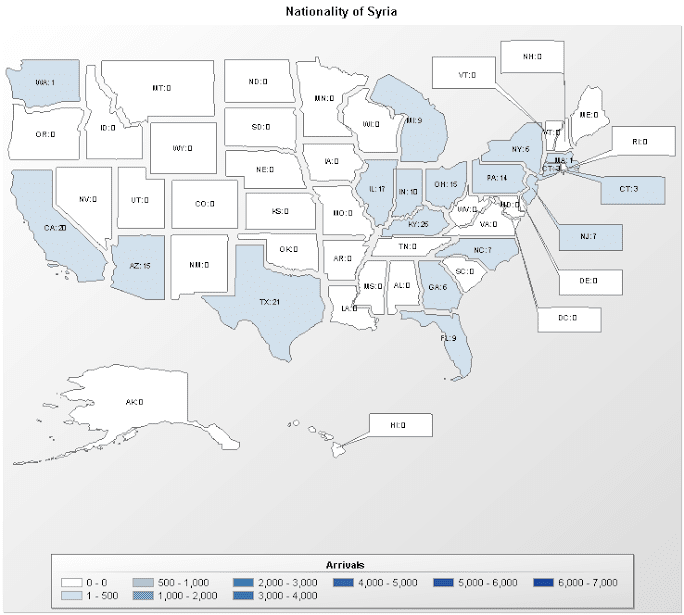 If you missed my report on the UNHCR talk in Washington on Thursday, here, then you missed his explanation about why the Christians weren’t coming in any great numbers—he says they are not persecuted by the Assad regime so they aren’t refugees in need of resettlement. I guess ISIS doesn’t count as a persecutor!

Will Mitch McConnell and Rand Paul say anything about the colonization of Kentucky? I won’t hold my breath!

*Go here to the Refugee Processing Center to see where I am getting the information.

Barry has identified the areas where the "bitter clingers" have made their communities and is sending refugees to those places. The re-organization of America, coming to you with Obama Love.