Granny Catlady's (which is the term Hillary Clinton's campaign prefers, I hear) legacy of lies continues unabated with new revelations that a whole swath of the SECSTATE's emails are "missing". 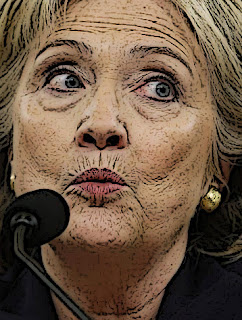 An Email Exchange Between Clinton And Gen. David Petraeus Confirms That Clinton Sent Emails During That Period.: "[Undersecretary of State for Management Patrick Kennedy] indicated his latest inquiry was prompted by State's discovery that one or more other officials exchanged emails with Clinton between January and March 2009, even though she produced no email records before March 18, 2009. State has confirmed that it now has an exchange Clinton had with Gen. David Petraeus during that period in part on her private clintonemail.com address." (Josh Gerstein, "Lawyer: Clinton 'Unable To Obtain' Emails From First Week As Secretary," Politico , 10/22/15)

BUT, BUT, BUT... Clinton Claimed That She Has "Fully Complied With Every Rule" Regarding Her Emails

BUT, BUT, BUT... According To The Federal Records, Act And State Department Regulations, Emails That Are Work Related Must Be Preserved

Federal Law States That Agencies That Allow Federal Employees To Use Non-Government Email Systems Must Ensure That Federal Records Are Preserved In The Appropriate Recordkeeping System. "Agencies that allow employees to send and receive official electronic mail messages using a system not operated by the agency must ensure that Federal records sent or received on such systems are preserved in the appropriate agency recordkeeping system." ( 36 C.F.R. 1236.24(b), Accessed 10/22/15)

State Department Regulations Stated That All Emails That Qualify As Federal Records Must Be Preserved. "The State Department Foreign Affairs manual is updated to reflect the emergence of something called 'electronic mail.' The manual notes: 'All employees must be aware that some of the variety of the messages being exchanged on E-mail are important to the Department and must be preserved; such messages are considered Federal records under the law.'" (Glen Kessler, "Hillary Clinton's E-Mails: A Timeline Of Actions And Regulations," The Washington Post , 3/10/15)

In short, Hillary Clinton's own attorney has admitted she violated federal laws.

Perhaps the media, which are breathlessly marketing the meme that Hillary's disastrous appearance in front of the Benghazi Select Committee, could make note of this simple and powerful fact.