Rep. Paul Ryan (R-WI) says he’ll take the job as House Speaker only if particular groups — including the important House Freedom Caucus — concede to a list of significant demands. Ryan is demanding support across the Republican conference and says he wants to be “that unifying candidate.” 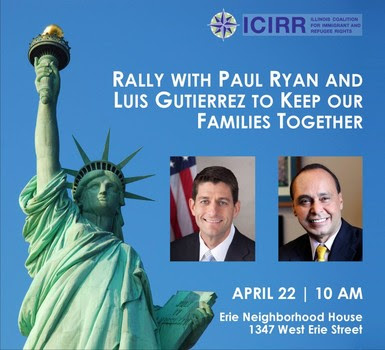 However, polling data reveals that a Ryan Speakership would do anything but unite the party.

On two of the issues of immense importance to GOP voters — trade and immigration — polling from the Pew Research Center shows that most GOP voters oppose some of the key ideological stances to which Ryan is devoted. The issues of trade and immigration also take on an especial importance as the Ryan-Sen. Marco Rubio (R-FL) immigration agenda led to the unseating of former Majority Leader Eric Cantor- which began the leadership shuffle – and the recent Ryan-led Obamatrade push helped bring the base’s criticism of the Boehner leadership team to a fever pitch.

During the 2013 push to pass comprehensive immigration reform, pro-amnesty Rep. Ileana Ros-Lehtinen (R-FL) said that Paul Ryan was working “every day” to further the immigration expansion plan. In 2013, while aggressively stumping for Rubio’s immigration plan, Ryan called for the implementation of open borders immigration policies which would allow for the legal and free movement of foreign labor and foreign goods across national boundaries. Ryan insisted that the U.S. needs an immigration system that has, “gates open to the people who are coming in pursuit of their version of the American dream.”

America, Ryan declared, “is more than our borders.”

Similarly with regards to global trade pacts, as Chairman of the House Ways and Means Committee, Ryan was essential to Congress’ passage of Obamatrade. As Politico is now reporting, a Ryan Speakership may prove critical to further cementing President Obama’s trade agenda– bringing about the passage of the Trans-Pacific Partnership (TPP).

“Ryan speakership could boost TPP’s chances,” Politico writes. “Ryan’s potential run for speaker would put a strongly pro-trade lawmaker in the most powerful position in the House, where he could use his credibility with conservative lawmakers — who have often broken with retiring Speaker Rep. John Boehner (R-OH) — to increase the likelihood of approving the Trans-Pacific Partnership.”

Pew also found that only a maximum of 7 percent of Republican voters agree with the Ryan-Rubio vision of increasing immigration. Except, given the wording of the question, it is likely that it is even smaller than 7 percent. The Pew poll asked, “In your opinion, should immigration be kept at its present level, increased or decreased?”

At our current rate of visa dispensations, each and every day the United States admits enough net immigrants to fill an overcrowded, metropolitan high school. Every three years, we add another entire city of Los Angeles made up of foreign-born immigrants.

Yet Ryan and Rubio believe that both the number should be even greater.

Despite the fact that 94 million Americans are operating outside of the workforce, Paul Ryan argued that we need to increase low-skilled immigration so that foreign laborers can come and go to fill any job they please. One of Ryan’s biggest conservative boosters in the House, Rep. Mick Mulvaney (R-SC), provided greater insight into the Ryan-Rubio vision of immigration.

In a recent Congressional hearing, Mulvaney argued that the nation would be better served by increasing the number of poor, uneducated, and “literally starving to death” migrants admitted into the United States. Mulvaney disregarded concerns of Heritage scholar Robert Rector, who explained that such a policy would create an enormous strain on the nation’s already overburdened safety net programs.

Ryan has similarly argued for an increase in low-skilled immigration to fill the jobs, he claims, Americans won’t do such as working in the hospitality industry in Wisconsin. We need to “have an open system… where the work that won’t be done by people who are already here can be filled by the people who want to come here,” Ryan has said.

National Review’s Rich Lowry once declared that Republican politicians who argue there are jobs Americans won’t do—or to use Ryan’s words “work that won’t be done by people who are already here”— “that person should be shot, he should be hanged, he should be wrapped in a carpet and thrown in the Potomac River.”

Indeed, a poll commissioned by the National Republican Senatorial Committee (NRSC) found that by a nearly 9-to-1 margin, Republicans want Representatives who believe that the first goal of our immigration policy should be putting Americans back to work– not importing more workers to fill their jobs, as Ryan-Rubio vision lays out. By an 8-to-1 margin, Republicans believe that the interest of the nation needs to be served above the interests of CEOs and immigration activists, who support the Ryan-Rubio vision and are “lobbying for open borders.”

In fact, in a demonstration of just how outside-the-mainstream the Ryan-Rubio view is, a recent poll from KellyAnne Conway’s The Polling Company found that 90 percent think American workers should get preference for jobs over those applying from foreign countries.

Yet in recently unearthed 2013 video, Ryan argues that it is the job of a U.S. lawmaker put himself in the shoes of foreign nationals who want to come to the U.S.– such as a “gentleman from India who’s waiting for his green card”– and then work to discover solutions to make these foreign citizens’ lives better. The NRSC found that by a greater than an 11-to-1 margin, Republican voters disagree with vision– and instead believe that needs of the American worker ought to be the first priority of any immigration policy.

Scholars on both sides of the aisle have demonstrated how the importation of foreign nationals, who overwhelmingly support for big government policies, will have the effect of disenfranchising Republican constituents.

Yet when asked in a radio interview about how the large-scale importation of foreign citizens from developing countries may disenfranchise his own constituents, Ryan seemed unconcerned by the experts’ findings.

Ryan continued to explain that it was the job of Republicans to import more of them and then seek to convince them of their conservative principles. “This is a challenge that conservatives have to answer, ” Ryan said.

However, as political scientists R. Michael Alvarez and Lisa Garcia Bedolla argue this will not be a challenge conservatives can answer unless they cease to be conservative. “The fact that this partisan identification is based on policy issue preferences suggests that, unless the parties fundamentally change their issue positions, these Latinos’ identifications with those parties should remain fairly stable.”

Indeed, to this day, Republicans have not been able to answer that challenge. Thought leaders like Mark Levin, Ann Coulter, Phyllis Schlafly, and many others have explained that it makes more sense to appeal to the Democrat-leaning immigrants already living here, before adding another 33 million more, as Rubio’s immigration bill would have done in the span of a single decade.

Beyond just immigration and trade, however, Ryan is out of step with Republican voters on a whole host of issues. As Phyllis Schlafly has written:

[Ryan] voted to fund President Obama’s unconstitutional amnesty… he voted to continue funding Planned Parenthood in spite of a federal investigation into their immoral practices… Ryan voted to give special rights to homosexuals in 2007 (ENDA), he voted to bail out Wall Street in 2008 (TARP), and upon becoming Chairman of the Budget Committee in 2011, he used his position of power to help punish conservatives for voting their conscience.

Ryan was also responsible for developing the GOP’s fiscal platform in the run-up to the 2012 election losses. Ryan’s decision to lead with a plan to cut Medicare spending-cuts pushed outside of the budget window — at a time when they had no chance of enactment, was seen by many as major strategic blunder. His budget did not balance and provided an easy target for Democrats.

Ryan was also responsible for a widely-panned strategy to cut veterans’ benefits instead of benefits for illegal immigrants. He is similarly at odds with conservatives on the issue of crime. As Breitbart News has previously reported, Ryan has called for the easing of tough policing and sentencing policies by providing “alternatives to incarceration”: “If Ryan becomes House Speaker he’s likely to force GOP legislators to vote on Obama’s rollback [of criminal penalties] which would release many violent criminals back on the streets.”

Ryan has been also been at the center of several high-profile efforts to increase the nation’s debt. As Sean Hannity said recently on his radio program, “Paul Ryan, on too many issues for me, is the same as Boehner… under the leadership of Paul Ryan and John Boehner, we’ve added $4.1 trillion to the debt.”

Moreover, while Ryan has expressed warm affection for Democratic Congressman Rep. Luis Gutierrez (D-IL), Ryan has smeared his own constituents who oppose large-scale immigration, and suggested that their aversion to the Ryan-Rubio “New America” vision is fueled by “ignorance.” Ann Coulter has pointed out that this tactic of demeaning Republican voters was similarly favored by Paul Ryan’s mentor Jack Kemp.

The extent to which the Ryan-Rubio vision for a New America is out of step with Republican voters highlights an interesting double standard for how Republicans and Democrats are expected to choose leaders. No one has ever suggested that the Democrat conference elect leaders who oppose core progressive values—such as the ability to have abortions or protecting the benefit programs established by President Johnson’s Great Society.

Yet that is precisely what Republican voters are being asked to accept with a Paul Ryan Speakership. As Curtis Ellis of the Executive Director of the American Jobs Alliance recently wrote, “Aren’t the majority of Republicans entitled to leadership that represents their views?”

While Paul Ryan has won the endorsement Democratic leadership, it remains to be seen whether members of the conservative House Freedom Caucus, who claim to vote their conscience in order to represent the desires of their constituents, will remain firm in opposing the donor class darling.

It's a motherfucking knife in my eye to read this. He is Tom Donohue's personal representative. He supports everyone of the CofC's policies.

Amnesty will not only make the Republican Party a PERMANENT minority party, it will finish the job of destroying our culture & traditions.

I can't believe it-myself and 10's of millions of conservatives have no representation in DC.

On top of this, the CofC has openly declared they will spend millions upon millions to destroy Trump-so even if Trump wins, how will he ever work with Ryan-they are 180 degrees apart on everything.
MM

To: Zardoz the Magnificent - You are 100% correct. A Paul Ryan Speakership would be the final nail in the coffin for conservative reform in the GOP party. Tom Donohue's influence MUST be crushed. All the good ol' boy cronies in the GOPe leadership's dance to Donohue's fiddle and it MUST BE STOPPED.

I've already mailed my GOP representative and told him NO to Paul Ryan. I doubt he'll listen but everyone needs to contact their GOP congressmen and tell them, no, DEMAND that they do not support Paul Ryan. That letter that he (supposedly) wrote to his collegues was a complete lie. For him to state that they were all conservatives was pure BS. And, also that he never thought he'd be speaker - what a crock. This has very likely been in the works for quite awhile, all orchestrated by Donohue, Wall Street, the GOPe AND Dem leadership (including McConnell, Barbour, Reid, Pelosi, Schumer and Obama as well). I'm so sick of the GOP I can't stand them - they sicken me to the core. They are traitors.