In full meltdown mode, ¡Jeb! goes running back to Nana and Papa for help with donors

The ¡Yeb! campaign is in full meltdown mode, which means -- you guessed it -- the Jebster has gone running back to Nanny and Poppy. 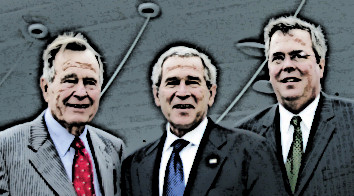 This closed-door summit for Jeb Bush’s richest donors was meant to be a pep rally, a reunion for loyalists eager to celebrate the family legacy with two former presidents... But as George H.W. Bush and George W. Bush draw supporters together under gray skies and unrelenting rains, the gathering has become a rescue operation for a candidate who looks unable to meet the expectations of the family brand...

...But behind closed doors, many donors also voiced concerns about the direction of the campaign. “Having 41 around helps take the edge off, but we all read the same newspapers and look at the same polls and it’s tough right now. There are a lot of people we thought would have written checks who aren’t on board yet..."

...Many of these dedicated Bush supporters are no longer denying that the guest of honor is unable to connect with a GOP electorate that has become increasingly fractured and stridently ideological since — and in reaction to — his brother’s presidency. And increasingly, donors say, they are no longer certain the Bush family can pull Jeb’s campaign out of its downward spiral.

Speaking of which, is there a better endorsement for Ted Cruz than George W. Bush's disparaging remarks regarding the brilliant Senator from Texas? Here's a guy who won't utter a peep regarding Barack Obama's ongoing scandals, his "pen and a phone" Constitutional Convention, his arson in the Middle East, and a simultaneous economic obliteration of the Middle Class -- but a guy who stands up and fights? Now, that can't be tolerated:

Former President George W. Bush reportedly ripped into Texas Sen. Ted Cruz at a weekend gathering of donors to his brother's presidential campaign, according to a published report Monday... Politico reported that Bush said of Cruz, "I just don't like the guy," at the event, which was held Sunday night in Denver ... Bush said he did not like Cruz's de facto alliance with Republican front-runner Donald Trump, who has notably spared Cruz from the criticism he has ladled onto other members of the 15-candidate Republican field.

"He said he found it 'opportunistic' that Cruz was sucking up to Trump and just expecting all of his support to come to him in the end," one donor told Politico when asked to describe Bush's remarks about Cruz. The report added that the former president had been engaging with amiable discussions about the state of the GOP race when Cruz's name came up.

Meanwhile, the Cruz campaign, which has actual grassroots support (what a concept!) noted a couple of big fundraising wins.

On one side of town, Jeb Bush met with worried donors. Not far away, Ted Cruz was boasting about the addition of wealthy CEOs to his finance team and touting the endorsement of one of the most powerful politicians in Texas: Lt. Gov. Dan Patrick, who lavished praise on Cruz, calling him a “true conservative” and an “outsider...”

...“We finished the last quarter reporting the most cash on hand of any Republican in the field,” Cruz said. “$13.8 million in the bank, $3.5 million more than the Jeb Bush campaign.”

And Cruz announced today the support of CEOs across the state who were among the top fundraising leaders for Rick Perry, the former Texas governor who dropped out of the presidential race...

Republican presidential candidate Ted Cruz has picked up the backing of a Texas billionaire and the state's lieutenant governor, his campaign said Monday.

Darwin Deason, a technology entrepreneur, and his son, Doug, had given millions of dollars to the 2016 efforts of former Texas Gov. Rick Perry, who ended his bid for the White House last month...

...The Deasons are marquee names for Cruz, but he has quietly consolidated the support of many former donors to Perry and another 2016 dropout, Wisconsin Gov. Scott Walker. The Cruz campaign added five other former Perry backers to its finance team, officials said on Monday.

Cruz gained a larger share of those candidates' donors than anyone else in the race, according to an analysis by crowdpac.com, a nonpartisan political analytics company.

I support Ted Cruz for President. We need a man who will defend the Constitution, before it's too late.

If you have the wherewithal, please consider helping out.

Good riddance! Now, go find something better to do...

Hmmmm... Those bushes sure do look like they need to be pulled out by the roots.