So the Republican Party is "Cooked" if it Loses in 2016? Then Run a Real Constitutional Conservative, You Morons!

The GOP's biggest wig, Reince Priebus, makes the understatement of the century clucking that if the Republicans don't win in 2016, the party is "cooked." 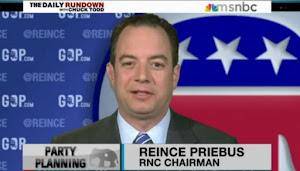 Gee, ya think? The Republicans have been on the way out since they started attacking their most active base: the Tea Party and Constitutional Conservatives.

When progressive moderates tried to rule with an iron fist, the writing was on the wall. And if the Bush-Kasich-Fiorina wing tries to rig the nomination, the party will be toast. It seems to despise Constitutional Conservatives with a real passion.

In fact, the only hope the Republican Party has of surviving is if the conservative wing is able to stage a coup and take the party back. But I'm not holding my breath.

The Republican Party was “cooked” a long time ago when they started treating their base with outright contempt.

GOP leader Reince Priebus told The Washington Examiner the Big Tent party is “cooked” if they don’t win the 2016 election.

The Republican Party is “cooked” if it fails to take back the White House in 2016, Republican National Committee Chairman Reince Priebus says.

In an interview with the Washington Examiner, Priebus said a Republican president is essential following two terms of a Democrat in control.

But Priebus adds he doesn’t anticipate a disastrous election for the GOP because “history is on our side.”

“Our job as a national party is to elect Republicans, and it generally means House, Senate, presidential,” Priebus told the Examiner.

This guy's delusional. History has nothing to do with this. A Marxist coup does. And what's with the deliberate losing of the last two elections and the aiding and abetting of Barack Obama? Right now the party is led by a bunch of incompetent weenies that lack a spine and common sense. So, tell me how alienating most of your party base is expected to win you anything? The RNC keeps claiming that Trump will not be the nominee when he is far and away the leader right now. No one in Congress will work with or support Ted Cruz because he tells the truth. Why should conservatives trust a damn thing these people say or do? I pray a true conservative gets in somehow and guts the heck out of the government. That would restore faith and would be a great start to rebuilding the Republican Party.

at 7:27 PM
Email ThisBlogThis!Share to TwitterShare to FacebookShare to Pinterest

Well, that's what happens when the Party Elite hate the base.

Fifty-five years ago, Ayn Rand wrote in "Conservatism, an Obituary":

"Capitalism...was the politico-economic system born and established in the United States, the system which, in one brief century, achieved a level of freedom, of progress, of prosperity, of human happiness, unmatched in all the other systems and centuries combined--and that that is the system which they are now allowing to perish by silent default.

If the "conservatives" do not stand for capitalism, they stand for and are nothing; they have no goal, no direction, no political principles, no social ideals, no intellectual values, no leadership to offer anyone."

The Republican party (the GOPe) "cooked" themselves. They left us, we didn't leave them. They lied, used and betrayed their conservative base for the last time and we're DONE. Boehner, Ryan, McConnell, Cornyn, McCarthy, and the rest of the GOPe "leadership" (actually, lack thereof) have decided to double down on supporting Obama and the democrat socialist/communist agenda. Instead of joining the TEA Party and the constitutional conservatives, they used us, kicked us in the teeth, thumbed their noses at us, lied, betrayed and killed any loyalty that we might have still had to them. What really sealed the deal for me was Mississippi and the dirty politics used to defeat Chris McDaniel and reelect Thad Cochran, by soliciting and bribing democrats to vote for him to defeat McDaniel, the clear favorite of the good people of Mississippi. That was the last straw for me. Mitch McConnell is a traitor and should take Boehner's example and get out while the gettin's good. He is the worst of the worst. The same goes for Karl Rove - Karl - sit down and STFU. You are a vile little man.