The Embarrassing Spectacle Known as the Democrat Debate

There are several self-evident truths about the Democrat Party that were revealed at their presidential debate earlier this week. And as they relate to the character of the party, what it stands for, and what its adherents believe, none bode well for the future of the country. 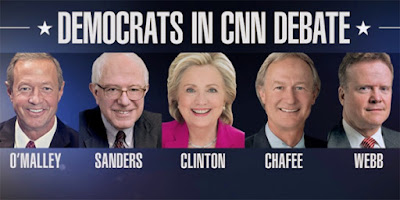 Bernie Sanders, the self-avowed Democrat-Socialist Senator from Vermont, drew perhaps the most boisterous response to his comment, “Let me say something that may not be great politics. The American people are sick and tired of hearing about your damn emails,” referring to Hillary Clinton’s FBI email investigation. Clearly Sanders was echoing the sentiment of the Democrat faithful as evidenced by the raucous response in the debate hall, but such a sentiment underscores the elitism of the party; the “rule of law” is selectively applied, and has little or no relevance to the elite. And in Democrat circles, there are none more elite than the Clintons.

Those with high level security clearance are beholden to the regulations designed to protect national security, and knowingly mishandling classified information (or even sensitive information not classified “Top Secret”), bears criminal repercussions. The cases of former CIA directors General David Petraeus and John Deutch clearly prove the criminal liability. And according to Judicial Watch, the Obama Administration has charged more government employees under the Espionage Act than any since the post-WWI era law was enacted.

MSNBC’s Joe Scarborough has aptly identified and clarified the problems with Hillary’s dismissal of email impropriety charges. “The State Department inspectors general said they found classified materials sent to and from Clinton’s Chappaqua home-baked server even though they only had access to a small sample of 40 e-mails. Of those, they found that four contained government secrets. That is information that if exposed could potentially harm national security. It’s information that is meant to be transferred and stored exclusively on secure computer networks with special safeguards.

“Again, of the self-selected e-mails that the Clinton camp chose to release, one in 10 of those e-mails seems to have held classified information. Put in perspective, Hillary Clinton turned in over 30,000 e-mails she said were work-related. She destroyed tens of thousands of e-mails, wiped clean her home-baked server and possibly destroyed copies of countless classified documents improperly stored and sent from the United States’ top diplomat. The extent of the cover-up, if there ever was one, will not be known because that evidence which could either clear or convict her is destroyed by the politician who is now at the center of this national security debate,” Scarborough detailed.

If General Petraeus’ informational indiscretions and national security protection had been as egregious as Hillary’s, he would be serving time and not escaped with merely a $100,000 fine. And even if the emails were not classified as “Top Secret,” what does it say about the judgment, or lack thereof, of one who aspires to be our Commander in Chief? Bad judgment, poor decisions, disregard for rules intended to safeguard the country, and the Democrat Party applauds her, claiming they’re sick of hearing about it. Contrary to what the New York Times averred after the debate, this was not the “adults in the room,” for adults take their oaths, and national security, seriously.

We must remember, in spite of the accusations of this being strictly political, the FBI, State Department Inspector General, and Dept. of Justice are conducting the investigation. None of this would have come to light without the congressional hearings that uncovered the improprieties.

Also disturbing at the debate was Hillary’s perpetual reference to her gender uniqueness, as if that’s a substantive reason to garner electoral support. She repeatedly reminded viewers, at least seven times, that she was a woman. I wasn’t aware there was any question about that. But is that a reason to vote for someone? Identity politics is as specious and vacuous an appeal for votes as any in the book!

Ditto for class envy politics echoed by all the candidates, but most obstreperously articulated by Sanders. “Middle class in this country is collapsing. We have 27 million people living in poverty. We have massive wealth and income inequality. Our trade policies have cost us millions of decent jobs. The American people want to know whether we’re going to have a democracy or an oligarchy as a result of Citizens United.”

Blaming the wealthy, rather than the laws and presidential actions that have decimated the middle class over the past seven years, is casuistic populism, and displays abject ignorance to the facts about the role government is now playing to vitiate economic growth. But it’s just so much easier to blame the wealthy and in pandering populist fashion, promise to punish them to the benefit of the rest.

And finally, what ever happened to liberals adulation of diversity? The debate was mostly a harmonious echo chamber of confirmation bias, where each tried to “out-progressive” the other. They mostly agree on everything, except perhaps the NRA. And even there, blaming the NRA for the Second Amendment is equivalent to blaming Citizen’s United for the First Amendment.

What the New York Time’s thought was, “The Grown-ups” taking the stage, was more like the JV team. When identity politics pandering, class-envy populism, lack of understanding of the adult issues, and “vote for me because I’m a woman” are the main course, anyone of substance would have come away hungry.