Writing at Colby College's The Colby Echo, Ian Mansfield offers an outstanding summary for those voters who haven't been paying attention to the swirl of rumors, innuendo, falsehoods, and facts surrounding Hillary Clinton's private email server.

Why does this matter for someone considering voting for Hillary Clinton?

...she was able to systematically delete any incriminating information regarding her time in office with complete discretion. This becomes especially important when we consider how she is the first Secretary of State since 1979 to have an ambassador killed under her watch. That tragic event in 1979 occurred months after the Soviet Union invaded Afghanistan, as opposed to our own invasion in Libya that effectively left the country in chaos, which is what happened in 2011 under Clinton.

Manfield also points out that Hillary's use of a private email server, which -- according to former officials in the Obama administration -- was almost certainly hacked by three or more foreign intelligence agencies.

A Secretary of State naturally handles highly classified information, which is the precise reason why they are required to use a government secured email for official business. Indeed, there is an ongoing FBI investigation into the matter that has concluded that some of the documents on the email contained classified information. Now, the main objective of the investigation has shifted to consider whether or not her private email server was breached, an act that could have far reaching consequences. We saw how detrimental the Snowden leaks were to US interests, diplomatic relationships, and most importantly, to the safety of US officials abroad.

Lastly, we are reminded of the real reason that Hillary Clinton operated her own email server:

The last and perhaps most important reason for voters to be concerned about the email scandal is how it relates to the plethora of other scandals surrounding the Clintons—most notably, the concerns surrounding the use of State Department contacts to further the interests of the Clinton Foundation. This was the subject of a New York Times article earlier this year. It detailed the transfer of money from Russian banks to the Clinton Foundation and to the Clintons personally through speech fees, as well as the corresponding work on behalf of the Clintons in brokering the sale of the largest uranium producer in North America to a uranium manufacturer owned by the Russian state. 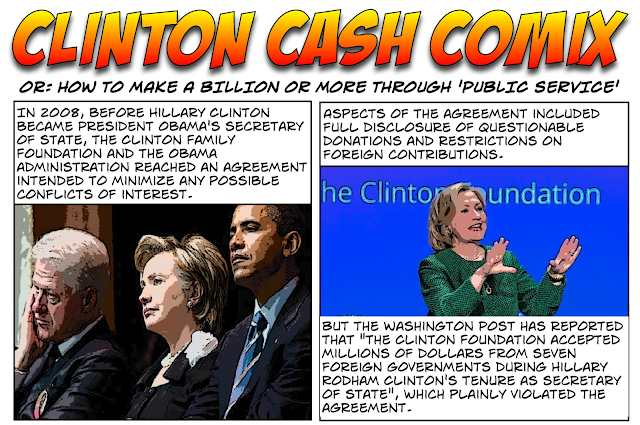 Seeing how Russia holds the largest nuclear arsenal in world— that is growing a far larger pace then that of the United States— and is increasingly expressing hostility to the US and its allies, the fact that they own a uranium manufacturer in our country should be of great concern. Since it appears that we are entering a Cold War 2.0 with Russia, evidenced by proxy wars in Ukraine and Syria, we can have the Clintons to thank for selling Russia one of our uranium producers. It behooves every American to educate themselves on the various issues surrounding Clinton’s use of a private email server so that we may determine whether or not she is the right person to lead this country.

Doesn't matter a bit to the army of free shit lo-fos.
MM