Democrats have become super enthused by the thought of mimicking Australia when it comes to gun control. Leftists running the gamut from Mr. Obama to pundits to media outlets have discussed implementing what Australia (and Great Britain) did on gun control. Hillary joins the crowd, with the transcript of her statement at a New Hampshire town hall provided by the Washington Free Beacon), which also has the video 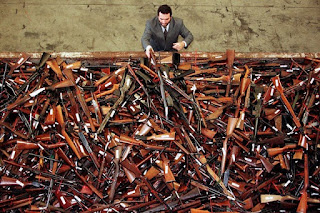 VOTER: Back to handguns. Recently, Australia managed to get away, or take away tens of thousands, millions of handguns. In one year, they were all gone. Can we do that? If we can’t, why can’t we?

In the Australian example, as I recall, that was a buyback program. The Australian government, as part of trying to clamp down on the availability of automatic weapons, offered a good price for buying hundreds of thousands of guns. Then, they basically clamped down, going forward, in terms of having more of a background check approach, more of a permitting approach, but they believe, and I think the evidence supports them, that by offering to buyback those guns, they were able to curtail the supply and set a different standard for gun purchases in the future.

... After the terrible 2008 financial crisis, one of the programs that President Obama was able to get in place was Cash for Clunkers. You remember that? It was partially a way to get people to buy new cars because we wanted more economic activity, and to get old models that were polluting too much, off the roads. So I think that’s worth considering. I do not know enough detail to tell you how we would do it, or how would it work, but certainly your example is worth looking at. [Applause]

Australia's buyback program was utterly coercive, and was actually a confiscation program, with cash given to owners to make it slightly more legal. It was mandatory. Democrats have moved so far left that they have no problem talking about gun confiscation, which would affect the law abiding gun owners, not the criminals who own and use them illegally.

Gun buybacks generally occur in Democratic Party run cities, and included criminals turning in their illegally owned/purchased/stolen guns for government money. Then they get another one. But, it's never mandatory like in Australia.

I wasn't aware of Australia allowing automatic weapons for private ownership ever, but, hey, this is the kind of scary talk Democrats like to throw out. As Allahpundit notes


So sanctified is the right to choose these days among progressives that not only can’t you find a top Democrat who’s pro-life, you can’t find a top Democrat who’d support any limits whatsoever on abortion. We’re headed there on guns if we’re not there already. Total confiscation is the obvious goal and increasingly, thanks to their demographics, they’ll be willing to say so. No limits. You simply can’t go too far left on this.

Choice only applies to aborting a baby. I wonder if Democrats, especially Hillary, who will certainly be the Democrat general election nominee, even if she is indicted for her email issues, realizes that Republicans will use these type of comments against them?

at 7:35 AM
Email ThisBlogThis!Share to TwitterShare to FacebookShare to Pinterest

yeah, this should do it.

"Buy back" is just more semantic incrementalism. What they mean and I wish one of these totalitarian mofos would just come out and say it, is they want to take our weapons away. They want the only people with weapons to be the government. PERIOD. IOW, a totally unarmed populace, yaknow, just so the only mass shooting are by "authorized" parties.

But they won't come out and say it because they know there are tens of millions of gun owners that know cattle cars is what follows and that most of those tens of millions would rather take a few ATF gorillas with them rather then a train ride to the camps.

Further, once that ball is rolling, there's no telling where or how far it'll roll. They know even with the latest and greatest weapons, they're outnumbered 100-1 by people with the DNA to end their DC dance once and for all.
MM