The Idiocy of Central Planning in One Simple Chart

Hubris is one of the most risible characteristics of the Leftists who seek to orchestrate and manage society.

They believe that they can set a single minimum wage that, on the one hand, provides a "living wage" for entry-level workers, yet somehow suits vastly different economic environments ranging from San Francisco, California to Bangor, Maine.

They insist that government-run health care -- despite the horrific track records of the Veterans Administration and the Indian Health Care System -- can somehow work even as Medicare and Medicaid sink into quagmires of fraud, inaccessible care and bankrupt states.

They claim that their Great Society programs, which sentenced the urban poor to Section 8 ghettos and destroyed the two-parent African-American family, just need more money and time -- as if $22 trillion and 50 years weren't enough.

And they resolutely whine that Social Security is a sacrosanct "benefit" even as it goes broke.

One of the best illustrations of the Leftists' failures is the U.S. life expectancy table published by the American Council of Life Insurers (PDF).

The Democrats are like insects trapped in amber. Facts, logic, reason and history are of no concern.

Consider the following table, describing life expectancy in the era when Social Security began compared to our current state. 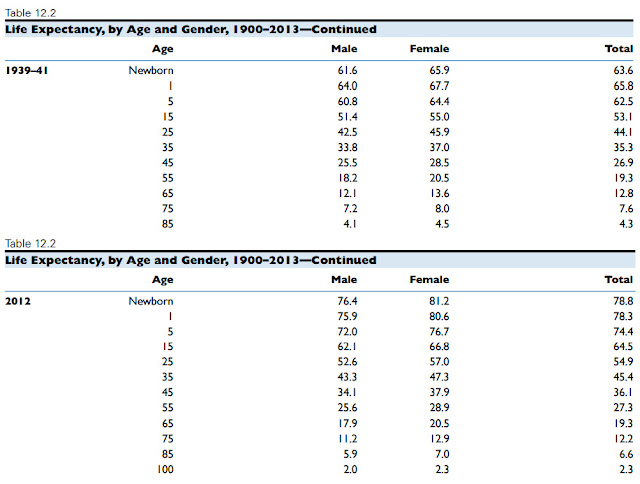 While life expectancy has increased 12 years on average, Social Security hasn't altered its lifetime payout policies in any meaningful way.

Click to see the growth in state Medicaid spending
Would you expect anything else from a government-run monopoly?

And any anytime a national politician attempts to point out the death spiral of these massive entitlement programs, they're promptly mocked by Democrats and/or depicted as pushing Granny off a cliff.

Suffice it to say that none of these programs will end gracefully.

They will collapse. And, when they do go bust in the next decade or so, it won't be the typical middle-income wage-earner that will be hurt the most.

It will be the poorest, oldest and weakest among us.

Oh, but Democrats are for the little people, right.

Will people only be able to figure it out once the checks don't show up in the mail - assuming there still is mail?