Taxpayers are apparently buying welfare recipients booze and cigarettes for the road — at times a very exotic road. 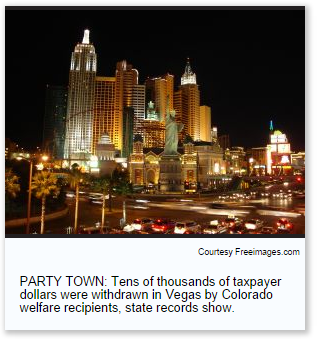 A Watchdog.org analysis of a Colorado Department of Human Services welfare ATM withdrawals database shows that $3.8 million was withdrawn by Colorado welfare recipients outside the state in the past two years. There were withdrawals at out-of-state liquor stores and tobacco outlets, as well as vacation destinations like Hawaii, Las Vegas and even the Virgin Islands, data shows.

State Rep. Tim Dore, R-Elizabeth, who has urged limitations on where welfare recipients can use their electronic benefit transfer cards in Colorado, was shocked taxpayers are apparently funding some exotic travel.

“I wasn’t even aware of that,” said Dore, who promised to try to address the misuse of cards at liquor stores, casinos and marijuana shops in the next legislative session after Watchdog asked him about those items for previous stories. “That’s an additional issue we need to look into it.”

The Watchdog.org analysis of out-of-state withdrawals found about 2 percent of Colorado welfare ATM withdrawals happened outside the state’s borders. About $882,000 amount occurred in states neighboring Colorado, which may make sense if the recipient lives near the border. That leaves about 1.7 percent of nearly $170 million, or $2.9 million taxpayer money, in withdrawals from Colorado’s traveling or vacationing welfare recipients in the past two years.

Additionally, nearly $8,000 was taken out from out-of-state ATMs in places that had the word bar, liquor store or tobacco in the establishment’s name.

“You can’t walk or drive to Hawaii or the Virgin Islands,” Dore said. “That’s a pricey flight. Using those cards there is concerning.”

Levetta Love, director of the CDHS Office of Economic Security, wasn’t familiar with the amount of money used outside the state, but said her welfare fraud investigators follow up on suspicious activity.

“I can’t confirm what you’re telling is occurring” out of state, she said.

Love said there could be legitimate withdrawals in other states when a welfare recipient is visiting family or going to a relative’s funeral.

But Dore said there is clearly some abuse of the system when the poorest of the poor can travel to exotic locations and apparently buy alcohol and tobacco on the taxpayer’s dime.

“I recognize there are human beings in plight when they use and abuse the benefits, but as a state we have a bigger responsibility to the taxpayers of Colorado to find a better way to do it,” he said.

Always nice to know that working my ass 70-90 hours a week and paying those taxes is keeping some folks from starving.
MM