Did you know that President Obama already has an "Ebola Czar"? Dr. Nicole Lurie is the Assistant Secretary for Preparedness and Response at the federal Department of Health and Human Services (HHS).

Lurie has been mysteriously absent from discussions of the Ebola outbreak. The media seems rather incurious about her even though she's served in her very high-ranking position for five years. She is one of only eight direct reports to the HHS Secretary. 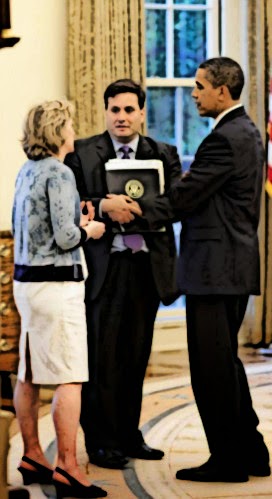 But Lurie has a sordid background: she was implicated in a major scandal three years ago, reportedly directing a $433 million grant to a major Obama donor "and away from a company that was developing a treatment now being used on Ebola patients."

So Lurie has been carefully written out of the media's stories on the government's response to Ebola. She's an embarrassment; one of thousands of incompetent, political hacks who have burrowed into the federal bureaucracy, seemingly more intent on thievery than on their actual jobs.

That explains why Lurie has been "unavailable for comment".

So who is the new "Ebola Czar", Ron Klain?

He's a far left Democrat political operative, who has served as a chief of staff for both the dumbest Vice President ever (Joe Biden, who previously served as the dumbest senator in American history) and the infamous global warming grifter and Al Jazeera supporter, Al Gore.

As Mark Levin pointed out on Friday, Klain has a "shady past" and was involved with Gore's lawless efforts to steal the 2000 presidential election.

And, like so many Clinton cronies, Klain is said to have profited from protecting Fannie Mae from proper oversight, one of the primary factors behind the 2008 housing meltdown.

What does Klain know about Ebola, or any infectious disease, for that matter?

What qualifies him to lead this critical effort?

It turns out: absolutely nothing.

My contention is that Klain is there to to cover up new cases of Ebola, to threaten hospitals and other medical facilities with financial retribution, and to otherwise attempt to salvage Democrats' midterm hopes by excising the word Ebola from the nation's headlines.

There is no other rational reason for Klain to serve in this capacity.

As Dan McLaughlin notes, putting Klain in charge of the government's Ebola response is somewhat akin to George W. Bush naming Karl Rove the head of Katrina recovery in 2006.

As with every decision this administration makes, politics trumps protecting the American people.

And people on this side of the pond yearn for a United States of Yurp. I weep for the USA, for what it was and what it represented, and for what it is becoming. People the world over dreamed the American Dream, it was myth but it was a powerful myth, it generated more global GDP than anything else in modern history. The Land of the Free and the Home of the Brave. My God, I sincerely hope so.

It will not be pretty. Those who think everyone else owes them something will not be happy. Those who think to attain power by pandering will have an even uglier time. Us ? You and me and all those that love our neighbors ? Its up to us to do the heavy lifting but you can rest assured that the Constitution will stand at the end.

re: covering up Ebola cases...

This is what I fear. If more people were dying of Ebola, how would we know?