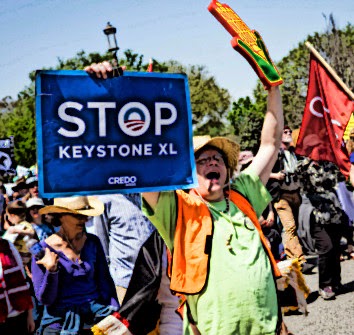 Opponents of the Keystone XL pipeline want you to believe that stopping the project will ensure that Canada won’t develop its oil resources. Well, someone forgot to tell Canada. From Reuters:

Environmental groups are fiercely opposed to new pipeline projects connecting Alberta's oil sands to the United States and the east and west coasts, reasoning that without market access crude production will slow.

But the latest weekly data from the U.S. Environmental Information Administration shows Canadian crude exports are ramping up rapidly despite the pipeline impasse.

"It's a pretty clear indication that crude will find its way to market around various constraints," said Sandy Fielden, analyst at RBN Energy.

The State Department came to the same conclusion in its economic analysis of the Keystone XL pipeline:

[A]pproval or denial of any one crude oil transport project, including the proposed Project, is unlikely to significantly impact the rate of extraction in the oil sands or the continued demand for heavy crude oil at refineries in the United States based on expected oil prices, oil-sands supply costs, transport costs, and supply-demand scenarios.

Much of this oil is moving by rail right now, but plans are in the works for additional pipeline capacity. Earlier this year, the Canadian government approved a pipeline to transport oil west from Alberta to British Columbia. It awaits approval from Aboriginal groups. Then there’s the proposed Energy East pipeline:

The proposed $12 billion project would send 1.1 million barrels per day of western Canada’s oil-sands crude 2,900 miles east to Saint John, New Brunswick, on the country’s North Atlantic Coast. The project would convert a 1950s-era underutilized natural gas pipeline and add extensions to each end: one to a terminal south of Alberta’s oil sands in the oil town of Hardisty and the other extending the reach of the pipeline from Montreal to a refinery in Saint John, which has supertanker access that would allow the crude to be transported globally, including to the refineries in Louisiana and Texas that the Keystone XL pipeline would be intended to serve.

It’s obvious that Canada will get oil to hungry global markets anyway it can. It continues making the case for the Keystone XL pipeline because it's a valuable conduit, but at the same time, it’s not waiting for a decision by the President.

The fact of the matter is while Canada continues developing and transporting its oil, America is losing out on the jobs, economic growth, and local tax revenue that would be generated by the Keystone XL pipeline.

Pipeline opponents are so rigidly fixed to their anti-energy ideology that they reject the economics and science surrounding the pipeline. Facts don’t matter to them. President Obama should ignore their hysteria and approve the Keystone XL pipeline.

All you need to see is that 'obama' logo to know these people are at the level of a fool like Gweneth Dumbeth.