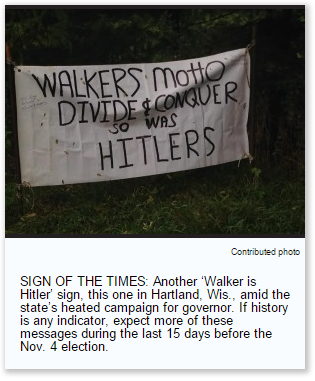 “WALKERS MOTTO DIVIDE & CONQUER SO WAS HITLERS,” proclaims the grammatically challenged, hand-written sign pinned to posts just off of Mariner Road near Wisconsin Highway 83 in Hartland.

The sign is across the highway from Westbrook Church, an Evangelical Christian worship center at 1100 Wisconsin 83.

A church employee confirms seeing the sign posted at the residence. She said the property has long posted one derogatory sign or another about Walker in recent years.

Wisconsin’s campaign silly season has kicked into hyperdrive, although the Hitler rhetoric is nothing new from the left, which holds a searing hatred for Walker.

In 2011, the governor successfully led a public sector collective bargaining reform bill, known as Act 10, that, according to unions and other critics, deprived Wisconsin’s government employees of their rights. Supporters, however, see Act 10 as returning rights to taxpayers.

During debate over Act 10, tens of thousands of protesters – the brunt of them connected with big labor – demonstrated at the state Capitol, while Democrat senators fled the state to stall a vote on the bill.

Hyperbolic signs lined the Capitol Square during those tumultuous times, signs comparing Walker to every despot from Hitler to Osama bin Laden.

The latest sign’s “divide & conquer” reference is an old liberal political chestnut, drawn loosely from comments Walker made to a campaign donors during what was believed to be an off-camera conversation. To the left, the governor’s turn of phrase, “use divide and conquer,” signaled a concerted campaign to take out organization, not simply fix a $3.6 billion budget shortfall that Walker and Republican lawmakers inherited after sweeping into power in 2010.