The Metropolitan Opera's "Death of Klinghoffer": An Insane Attempt to Justify Terrorist Savagery

Politics: Only the insane political correctness of the left could try in an opera in the city attacked on 9/11 to humanize and justify the murder by Palestinian terrorists of 69-year-old, wheelchair-bound Leon Klinghoffer. 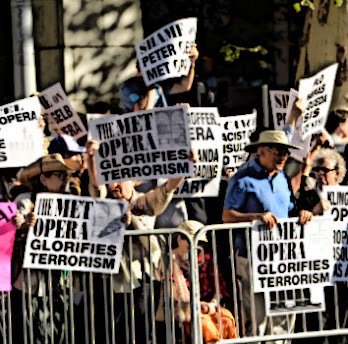 We don't do opera reviews, but the opening of the Metropolitan Opera of New York's production of the "Death of Klinghoffer" is as much a political event as it is an artistic one.

In a particularly grotesque way, it tries to create a moral equivalence between a group of terrorists and their victim by explaining the "reasons" for their criminal and terrorist act.

Before the hijacking was over, the terrorist hijackers shot and killed Klinghoffer, an American Jew, then pushed him and his wheelchair overboard.

One of the protestors, Rabbi Avi Weiss, said the opera's music largely extols the terrorists beginning with the "Chorus of Exiled Palestinians" while slandering Klinghoffer's Jewish ethnicity by introducing characters with the lyrics "I've got no money left. I gave all my money for the taxi."

Klinghoffer's surviving daughters, Lisa and Ilsa, in a statement released through the Anti-Defamation League to be included in the Met program for the opera, said: "It presents false moral equivalences without context, and offers no real insight into the historical reality and the senseless murder of an American Jew."

The meme that somehow terrorism is all the fault of Israel and America was carried on in the ranting sermons of the Rev. Jeremiah Wright, President Obama's pastor for some two decades, who preached that 9/11 was one of America's chickens coming home to roost.

If we hadn't responded with a war on terror that carried the fight to terrorists and their state sponsors in Iraq and Afghanistan, the story goes, the hornet's nest would have remained unstirred and there would be no Islamic State beheading Westerners.

This of course is nonsense. The plight of the Palestinians is in many ways a self-inflicted wound when you consider the leaders they have chosen.

These range from the plundering and murdering Arafat to his heirs in Hamas, who, instead of turning an unoccupied Gaza into the Hong Kong of the Middle East, decided to make it a launching pad for rockets targeting Israeli civilians.

The murderers of Leon Klinghoffer had no more historical justification for their actions than did the murderers of Daniel Pearl or the Islamic State butchers who decapitated Steven Sotloff and James Foley.

Perhaps the Metropolitan Opera can also put on productions about them as it pushes the truth overboard.