In movies, handsome men and beautiful women speak eloquent words written by others and perform profound or heroic actions that they were never required to do in real life. 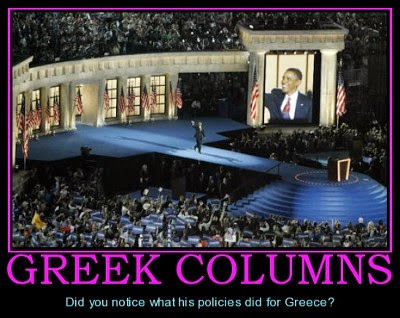 Like a Hollywood fantasy, Obama's is a make-believe presidency. No one expects leadership from a celebrity and no one expects him to mean what he says.

Obama is at his best on a stage set with human props in the background, reading from a teleprompter script to an audience of adoring fans.

Like the son of a Hollywood mogul, Obama breezed through life with an Affirmative Action wind at his back. He was made President of the Harvard Law Review having never written a legal article, was an unremarkable Illinois state senator and made no impact on national events in his brief tenure as a US senator. He was awarded the Nobel Peace Prize based on rhetoric rather than accomplishment.

Much like the intellectual vacuity of Hollywood, Obama's incompetence is camouflaged by the ignorant approval of naïve or ideological groupies and a fawning and uncritical media.

Unlike Obama, Ronald Reagan earned his success and demonstrated leadership throughout his career. He was elected both high school and college student body president. Reagan studied at Eureka College, a small Christian school near Peoria, on a half-tuition scholarship. He majored in economics and sociology, took part in dramatics, football, track and swimming. After graduation, he worked as a sportscaster and signed a movie contract as a result of a screen test for a radio announcer role, while in California for the Chicago Cubs spring training. Reagan became president of the Screen Actors Guild in 1947 and was elected to five more terms. He was twice elected Governor of California as a Republican in the consummate Democratic state.

Unlike Obama, Reagan demonstrated an uncommon ability to give voice to the innate patriotism of the American people and, more than any other politician of his time; he had an affectionate, long-lasting relationship with his countrymen. On his 70th day as president, March 30, 1981, after an address to labor leaders at the Washington Hilton Hotel, shots were fired and an assassin's bullet lodged one inch from his heart. The grace, courage and, yes, the humor with which he handled that event, cemented his affectionate relationship with the American people.

Unlike Obama, narcissism, arrogance and pretentiousness were not the Reagan style. He was the American's American, a president we could take pride in when he traveled to other countries, even if there was the occasional gaffe. Reagan deflected much ridicule by leading the laughter himself. He had good speechwriters, but Reagan's delivery always glorified the material rather than glorifying himself.

Would anyone ever expect Obama to describe America as "that shining city on a hill?"

In a recent interview, former CIA Director and Secretary of Defense Leon Panetta said that Obama "has the guts to do the right thing" on ISIS, for example, but the real question is whether he will make the decision to act.

Isn't the essence of courage, though, the ability to act decisively, not merely having the intention to do so?

The audacious actions taken by Reagan changed history, led to the fall of the Soviet empire and the freedom of Eastern Europe.

Obama fails because world and national events cannot be addressed simply by words scripted into a teleprompter, but require courage and resoluteness. If Obama changes history, it will most likely be due to inaction abroad and the implementation of flawed policies at home, both to the detriment of the United States.

Unlike Obama, Ronald Reagan was vilified by a biased media, scorned by Hollywood elitists and ridiculed by leftist university faculties, but he was an ardent patriot, a proven leader and a man loved by ordinary Americans.

What does that tell you?

Man I miss him-I'm so grateful I realized what a great president he was AT THE TIME. And now, whoa, the comparison is pathetic.
MM

Gee, who does this failed contrivance remind us of?... Why, Hillary Weiner Clinton!