NICOLE LURIE: Obama's First Ebola Czar Was Embroiled in a Massive Scandal in 2011 and Still Holds Her Job

In November 2011, David Willman of The Los Angeles Times described another instance of taxpayer abuse by the Obama administration, this time in the Department of Health and Human Services. Obama's first "Ebola Czar" -- Dr. Nicole Lurie -- is said to have directed nearly half a billion dollars to a huge Obama donor for a vaccination no one wanted.

Perhaps some of the geniuses in the GOP can dredge up this article when they're accused -- falsely -- of slashing someone's budget. First off, no one's budget's been slashed. Second, MRC has documented the copious, criminal waste of money by the National Institute of Health and the Center for Disease Control.

But back to the original Ebola Czar, Dr. Lurie. Let Willman tell the tale:

A company controlled by a longtime political donor gets a no-bid contract to supply an experimental remedy for a threat that may not exist. 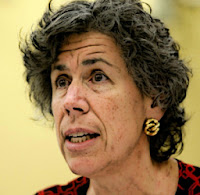 Reporting from Washington — Over the last year, the Obama administration has aggressively pushed a $433-million plan to buy an experimental smallpox drug, despite uncertainty over whether it is needed or will work.

Senior officials have taken unusual steps to secure the contract for New York-based Siga Technologies Inc., whose controlling shareholder is billionaire Ronald O. Perelman, one of the world's richest men and a longtime Democratic Party donor...

Costs "well above what" specialists said was reasonable

When Siga complained that contracting specialists at the Department of Health and Human Services were resisting the company's financial demands, senior officials replaced the government's lead negotiator for the deal, interviews and documents show.

When Siga was in danger of losing its grip on the contract a year ago, the officials blocked other firms from competing.

Siga was awarded the final contract in May through a "sole-source" procurement in which it was the only company asked to submit a proposal. The contract calls for Siga to deliver 1.7 million doses of the drug for the nation's biodefense stockpile. The price of approximately $255 per dose is well above what the government's specialists had earlier said was reasonable, according to internal documents and interviews.

A Waste of Time and a Waste of Money

...Dr. Thomas M. Mack, an epidemiologist at USC's Keck School of Medicine, battled smallpox outbreaks in Pakistan and has advised the Food and Drug Administration on the virus. He called the plan to stockpile Siga's drug "a waste of time and a waste of money."

The Obama administration official who has overseen the buying of Siga's drug says she is trying to strengthen the nation's preparedness. Dr. Nicole Lurie, a presidential appointee who heads biodefense planning at Health and Human Services, cited a 2004 finding by the Bush administration that there was a "material threat" smallpox could be used as a biological weapon.

...Negotiations over the price of the drug and Siga's profit margin were contentious. In an internal memo in March, Dr. Richard J. Hatchett, chief medical officer for HHS' biodefense preparedness unit, said Siga's projected profit at that point was 180%, which he called "outrageous."

In an email earlier the same day, a department colleague told Hatchett that no government contracting officer "would sign a 3 digit profit percentage."

In April, after Siga's chief executive, Dr. Eric A. Rose, complained in writing about the department's "approach to profit," Lurie assured him that the "most senior procurement official" would be taking over the negotiations.

"I trust this will be satisfactory to you," Lurie wrote Rose in a letter...

Lurie denied that she had spoken with or written to Rose regarding the contract, saying such contact would have been inappropriate.

But in a subsequent statement, an HHS spokeswoman acknowledged Lurie's letter to Rose, saying it "reflects the critical importance of the potential procurement to national security."

Ties to the SEIU

...[In 2004] Siga purchased the rights to what became known as ST-246 and other assets from a Pennsylvania company, ViroPharma Inc., for $1 million in cash and 1 million shares of Siga's common stock...

...In June 2010, Siga further heightened its presence in Washington by naming to its board Andrew Stern, former head of the Service Employees International Union and a frequent visitor to the Obama White House. The union is a wellspring of campaign money and volunteers for Democratic candidates.

On Oct. 13, 2010, Siga announced that the government intended to award it a contract for ST-246 worth as much as $2.8 billion. Within days, Siga's stock price soared.

But the federal contract required that the winning bidder be a small business, with no more than 500 employees. Chimerix Inc., a North Carolina company that had competed for the contract, protested, saying Siga was too big.

Officials at the Small Business Administration investigated and quickly agreed, finding that Siga's affiliation with MacAndrews & Forbes disqualified it.

The Obama administration could have awarded the contract to Chimerix as the only eligible small-business applicant. Or it could have reopened the competition to companies of any size.

Instead, the administration moved to block all companies — except Siga — from bidding on a second offering of the contract.

This is the most corrupt and inept administration I've seen in my lifetime and that I know of from my knowledge of history. I feel like I'm living in tyranny and it's going to keep getting worse for at least two years.

The most amazing thing is the relative lack of outrage. Imagine if Bush did this.

They're crony socialists and liars.

Both answers will any rationale person cry.

OBAMA still holds his job! Since when is HE off the hook?